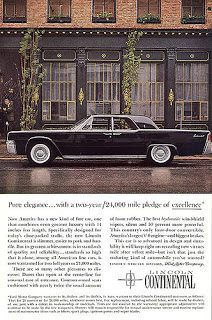 Ford Motor Company is holder of many brands. Ford, itself, is the populist; value; everyman brand. Mercury has bid farewell to Canada and soldiers (that’s positive spin) on in the United States. Although Aston Martin in has been sold to a British/Kuwaiti consortium, other elements of the Premiere Automotive Group remain. Volvo, Land Rover, and Jaguar remain nestled in the Ford fold.

Mazda is a Ford Motor Company success story. The reinvention of its performance image was more than marketing; it was product driven. Finally, there’s Lincoln – former member of PAG, former heralded luxury brand, former transportation of Presidents, and a pipe dream for the impoverished.

Oooh dear Lincoln. What have you become? Connected with the previous GoodCarBadCar post in which General Motors showcases its aging SUV platform under four (formerly six) brands at widely varying price points, this article is meant to show you the depth of a hole a once admired company can dig.

Because Lincoln dug really deep. The ladder Ford needs to chuck down the well to aid Lincoln in its quest to reach the surface is very long indeed, with many large and many small steps. At this point in time, Lincoln sells: two cars (MKZ/Town Car), one truck (Mark LT) and two sport-utes (MKX and Navigator).

Phrase it this’a’way: Ford sells two trim levels of the Crown Victoria named Grand Marquis and Town Car. Ford’s Fusion can be seen at the dealer in Milan and MKZ equipment editions. The F150 is especially blingtastic when adorned as a Mark LT. Ford can sell you the MKX version of the Edge if your neighbourhood is more Acura than Honda. Not only that, but your old Expedition pales in comparison to the completely OTT Navigator.

Ya know about the only good news from the JFK assassination? Jack was in the back of a Lincoln Continental, which, at that time, was quite a veeeeehickle. Ya know the worst news you can give to a Lincoln executive? I wasn’t alive to see that car in its pre-antiquated state, nor were most of my readers, nor do any of us really, genuinely care about how cool the Conti was in the 60’s.

Find me a Cadillac SRXalike with a Bow-tie badge? Impossible. Sure, an Escalade shares plenty with Chevrolet and GMC vehicles, but it manages to stand out as a desirable vehicle. Cadillac’s latest CTS is a success story in The Good Car Guy’s mind and you can’t find anything like it on Chevrolet.com or Pontiac.com.

Ought Caddy to be Lincoln’s role model? Perhaps the final imagery in Lincoln exec’s minds is that of Lexus or Mercedes-Benz, not their national rival. However, Cadillac revitalized what was a staid, boring, dying model range with design, spunk, and performance. Lincoln can’t be looking to Lexus as an example of how to come back from the brink.

As already mentioned, the factor which Lincoln must fight through is that of young buyers (a newly licensed driver will be a few years out of college by the time two or three new generations of each Lincoln model line arrive) aversion to a brand of automobile which has been driven by their grandparents friends. Throughout most of life, BMW and Audi and Lexus have been considered as the top-tier and Cadillac and Lincoln were built for old people and hearses.

Lincoln can’t overcome that stigma with a rebadged Fusion or an F150 trim level. We only hate Lincoln more each time a vehicle enters the marketplace with that kind of disregard for what people really want. Give me uniqueness; performance; cool; innovative; high-value luxury. Or rest in peace. We wish a slow and painful death upon no great American brand.