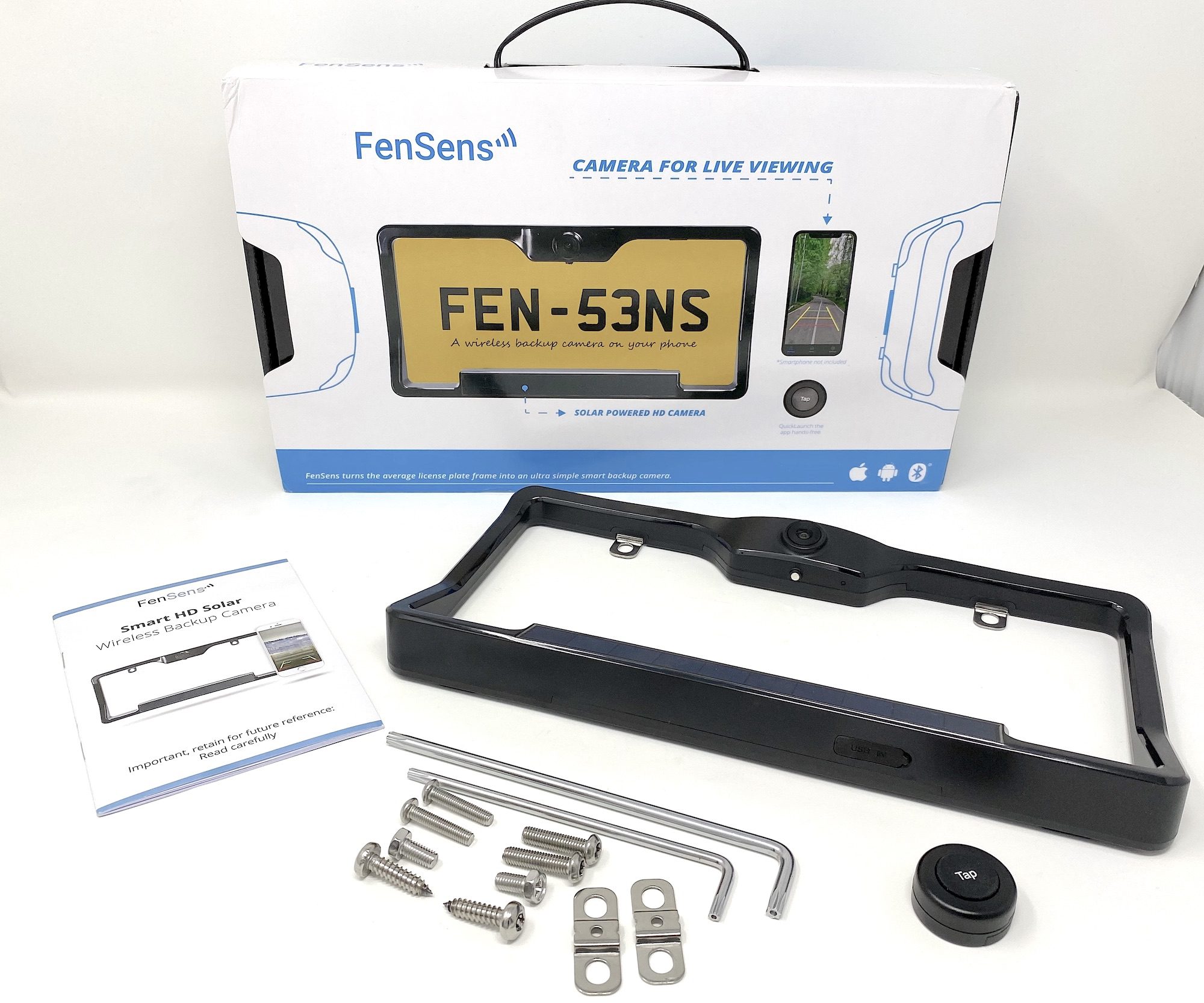 Backup cameras are mandatory equipment on new cars. They have been government-mandated safety equipment since 2018, according to CNBC. Many companies were already making backup cameras standard equipment before 2018—the law actually passed in 2014, and it gave a few years for companies to become compliant—but these days every car company must include a backup camera on production vehicles.

However, many older cars still being driven by people all across North America do not have backup cameras. My wife and I both own cars that do not have this feature, so when FenSens asked me if I’d like to test a wireless aftermarket backup camera that could be easily added to my vehicle, I said yes.

Why Get Wireless Backup Camera

The main reason to get one of these cameras is safety. Your mirrors can only show you so much. A camera gives you an angle behind you that you can’t otherwise see.

According to the CNBC article linked above, over 200 people die of backover accidents and over 12,000 are injured. Backup cameras can help prevent these types of accidents. Also, they can prevent the thousands of little low-speed parking lot fender benders many of us have been involved in over the years.

Preventing damage and possible injury or death are good enough reasons for me. So, when the product arrived, I was excited to get it installed.

What Comes in the Box 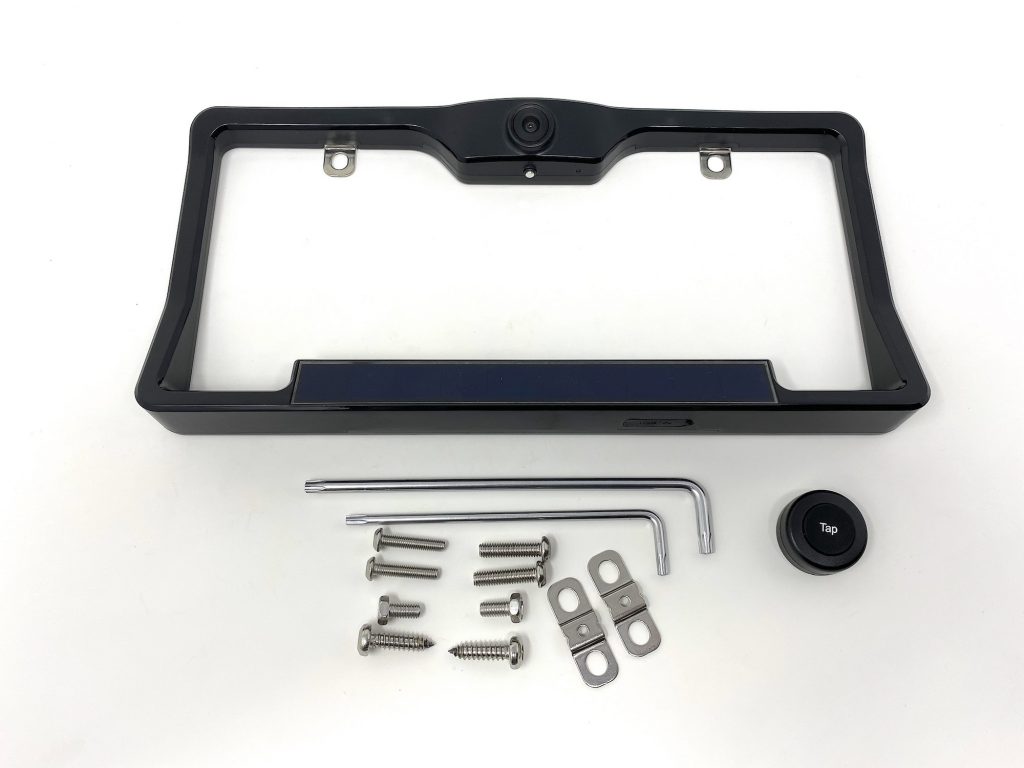 The FenSens Wireless Backup Camera system comes with everything you need, and it works in conjunction with your smartphone via an app. It comes in a little suitcase-style box with the license plate holder and camera. On that holder is a solar panel that provides enough power to make the camera work.

There’s also plenty of screws, adapters and little tools to get the license plate holder and camera secured on the back of your vehicle. The parts included should be enough to get your camera in place on just about any car, SUV, minivan, or truck. 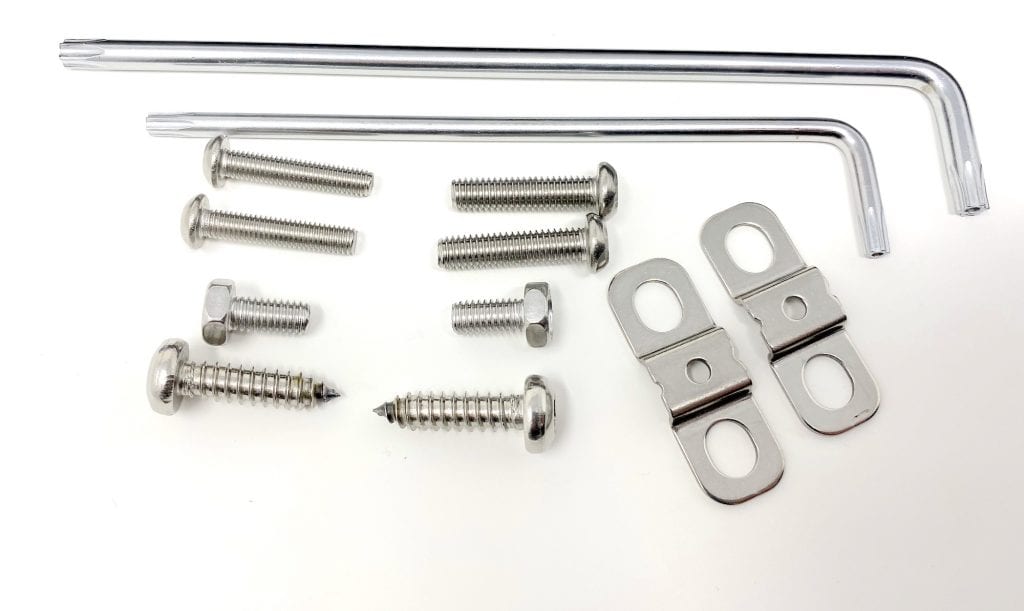 There’s also a small Tap button that you can keep inside your car. It’s a single button that’s supposed to make activating the camera very easy. This allows you to not have to go into your phone and select the app every time you need to use the camera. You can just get into your car, hold the button for a few seconds and your phone will pull up the camera view behind your vehicle.

What’s Missing From the Box

While the kit comes with everything you need to make the system work, there are a few things that would also be nice to have. First is some kind of mount for your phone. I don’t know about you, but I don’t have a mount for my phone where I can see its screen. When I drive, it’s either in my pocket or in the center console of my car.

To really be able to use the backup camera, you need to be able to see the screen of your phone, and unless you want to hold it in your hand, you’ll need a phone mount or holder of some kind. There are many options out there, but just keep in mind that this will be an additional cost.

Second, the little Tap button is handy, but the kit came with no way for me to mount the button to the dash as the pictures showed. I remedied this with some tape, but that is less than ideal. You could get some kind of adhesive that is a little more official, but just keep in mind that if you plan on using the button, you’ll need to find a way to hold it in place on your dash or wherever you plan to put it. 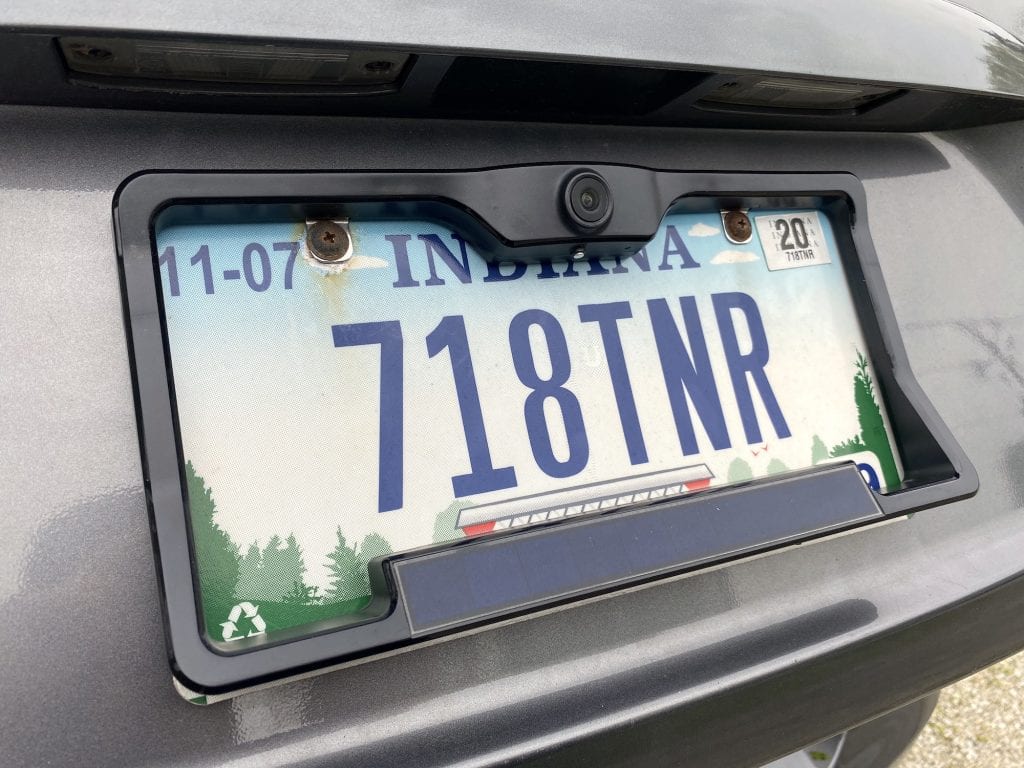 If you have somewhat odd spacing or any issues, FenSens provides some adapters and several screws, so you should have no issues getting the camera in place. I didn’t have to use any of the screws or adapters provided. I was able to reuse the original screws that hold the license plate in place. 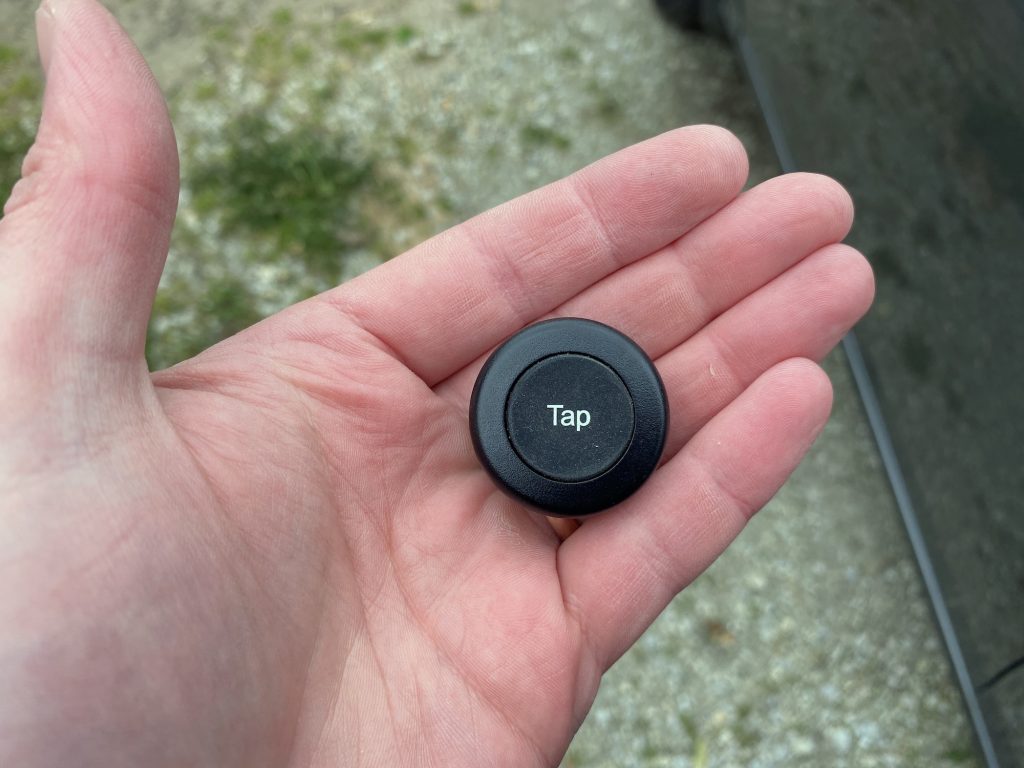 As for the Tap button, as I said above, I had to use a bit of tape on the back of the button to get it secured to the dash. I tried some double-stick tape, but it only half worked, so I went ahead and used a loop of electrical tape, which held the little button fast, easily. 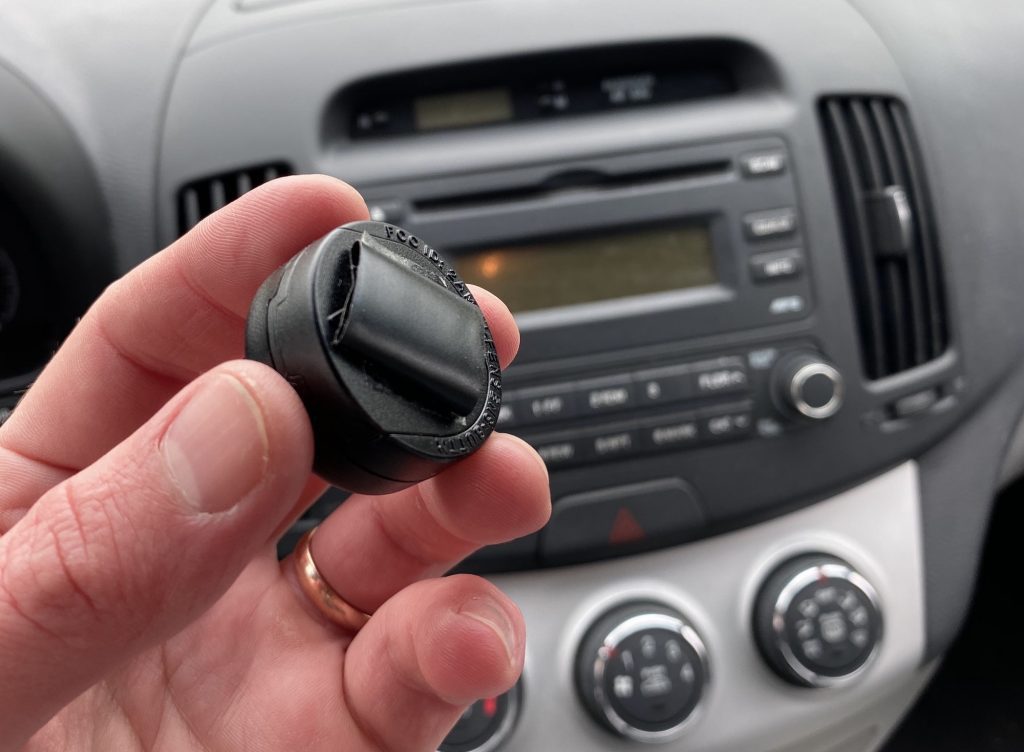 From there it’s all about getting the Wi-Fi, Bluetooth, and app setup. The setup process is easy. The camera itself operates off a Wi-Fi connection to your phone. The Tap button operates off Bluetooth. The product comes with a detailed manual, and there is even more instruction online. The app is straightforward and walks you through each and every step.

You create an account, accept all of the permissions for the product to work properly, then configure the Wi-Fi for the camera, and then the Bluetooth for the Tap button. Once it’s all configured, you can tap the camera view in the app and see right behind the car. 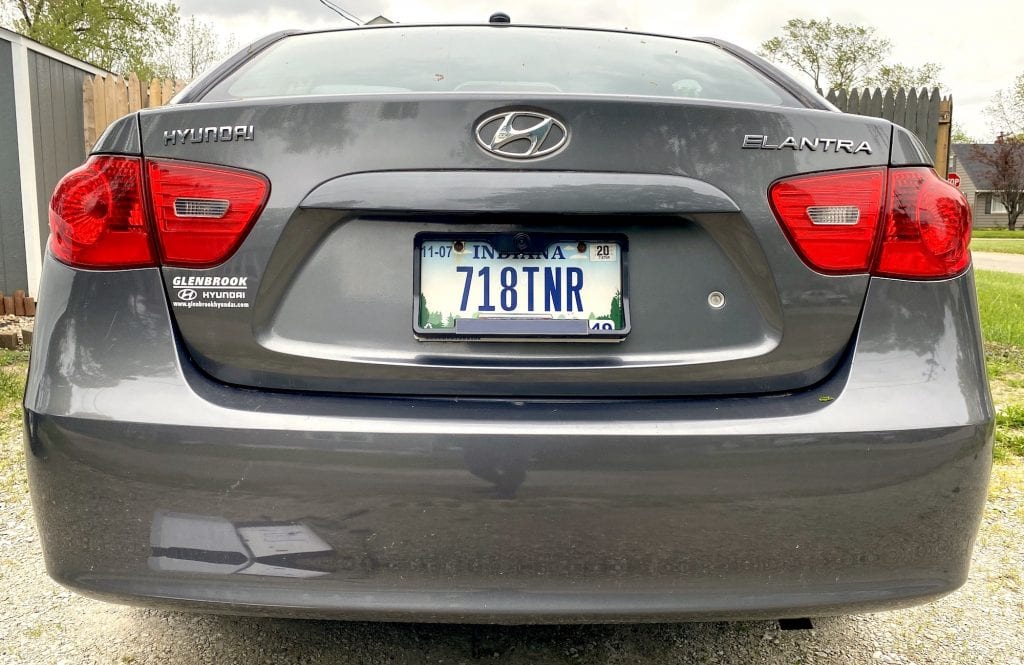 The install and setup went smoothly, and I expected the operation of the product to work well, too. Unfortunately, that was not the case. The camera view behind the car was clear and the resolution of the picture on the screen was excellent, but when I moved the car, the image didn’t move.

I stopped rolling back into the alley behind my house, and a few seconds after stopping, the video caught up. It was lagging behind what was actually happening by a couple of seconds. That’s no good for a backup camera, which needs to show things as they happen in real-time.

I got back on the app and did some troubleshooting. The app suggested that I turn off cellular data while using the camera. I did that and experienced only slightly better performance from the camera. Online, after some more troubleshooting, I saw that FenSens suggests turning of both cellular data and Wi-Fi assist for iPhone users. I did this and still experienced the same issues.

I’m not the only one who has experienced these issues. There are numerous reviews on the FenSens app that report similar issues, and the same can be said of the customer reviews at marketplaces that carry this product.

Should You Buy It? 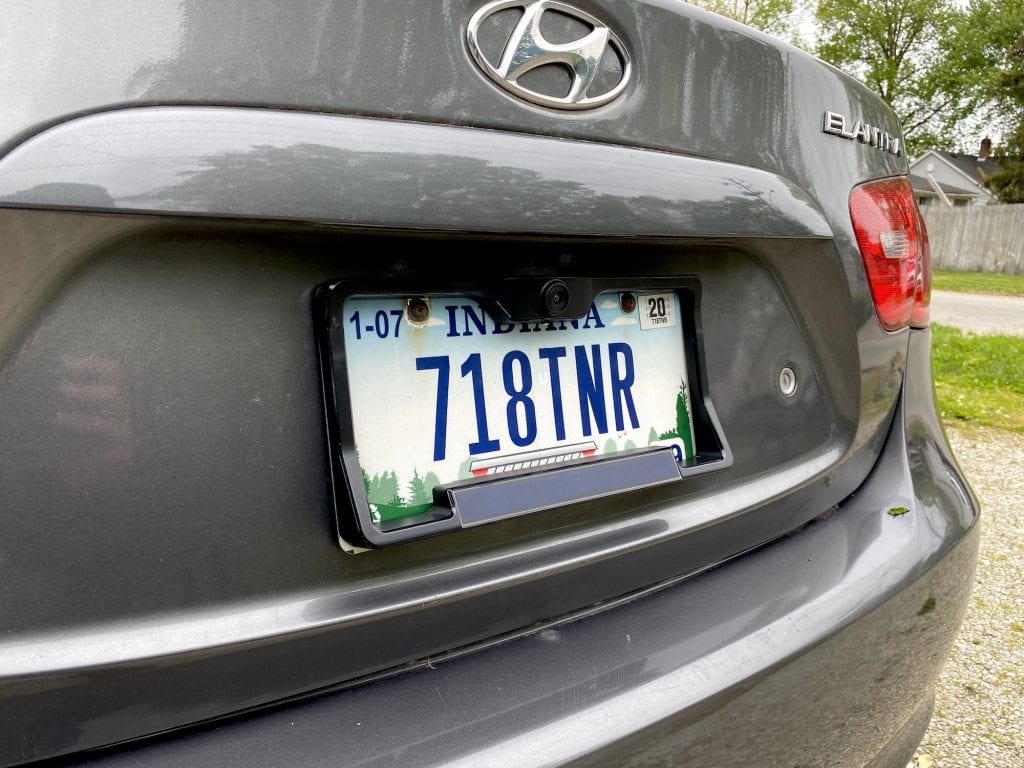 If the question is, “Should you get a backup camera for your car?” I would say, of course. Having a backup camera gives you a pair of eyes where you can’t easily see and can be a nice addition to your car’s rearview and side mirrors.

If the question is should you get this particular backup camera? I’d have to say most definitely no. It looks like a great solution and I was easy to install, but the fact that it lagged horribly, makes it more or less unusable.

At first, I thought this was just my experience, but after doing some additional research online, I’ve found that many other customers have voiced their opinions that the FenSens Wireless Backup Camera did not meet their expectations. The company did release an update to the app a three months ago, which it said should clear up the issues with the lagging video, but I have the most up to date version and I’m still experiencing severe lagging.

If the lagging didn’t occur, then it would be a good solution, but until the company can clear that up, I cannot recommend you buy this product.