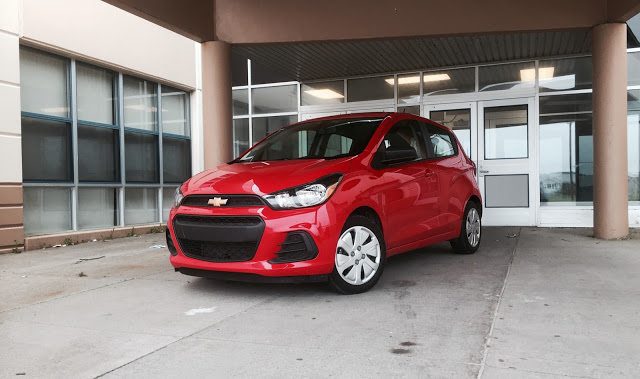 Automobile manufacturers in Canada almost always hide at least $1500 of a car’s price in the fine print. They’ll call it a destination charge, or freight, or freight and PDI.

15 months later, we’re driving the Micra’s direct competitor, a 2016 Chevrolet Spark that’s even painted the same colour. For seven extra dollars, the Spark loses a seat, gains a heaping helping of refinement, and sacrifices some fun.

Isn’t it nice that the Canadian Tire cashier doesn’t alert you to a $16 surcharge when you’re about to pay for a set of $59 rubber mats?

WHAT IS IT?
Excluding the Corvette and Camaro sports cars, GM Canada sells six passenger cars through its core Chevrolet network. At the top, there’s the full-size Impala. The midsize Malibu is all-new for MY2016. So too are are the plug-in hybrid Chevrolet Volt and the compact Chevrolet Cruze. Chevrolet’s subcompact Sonic is lightly refreshed for MY2017. 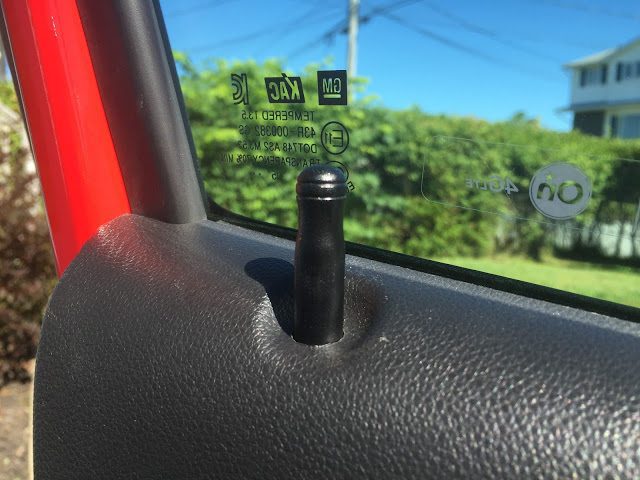 At the bottom of the heap, with a base price of $9995 (plus $1600 in destination charges) sits the all-new, fourth-generation (North America’s second) 2016 Chevrolet Spark LS.

Our test car arrived from GM Canada with no options and Salsa Red paint. The Spark’s 1.4L inline-four produces 98 horsepower and 94 lb-ft of torque and is linked to a 5-speed manual transmission.

Want an automatic? You’ll have to spend another $4000 to get the two-pedal continuously variable transmission, but you’ll gain air conditioning in the upgrade process.

HOW BIG IS IT?
You’ve seen the pictures, the Spark is pretty freaking small.

Consider that the Sonic hatchback, Chevrolet’s subcompact car, is 472 pounds heavier than our Spark tester, 16 inches longer bumper to bumper, and nearly half a foot wider.

DOES IT WORK?
If driven like you mean it, the 2016 Chevrolet Spark’s comfort-oriented setup devolves into a riot of protesting tire squeal before you even get serious. The Spark has a masterful way of traversing terrible roads – with only 94 inches of wheelbase – far more serenely than many premium cars we’ve tested over the last year, but that is the car’s lone dynamic standout.

The Spark’s smooth ride is negated by a lack of turn-in verve and enough body roll to challenge for a spot on The Biggest Loser. On a fast uphill right-hander, a disconcerting amoung of Spark mass is thrust upon the Spark’s left rear wheel. Fairly certain you’re not going to tip over backwards in a barrel roll, you still find yourself asking passengers for confirmation.

Shifting the manual transmission is an experience awful enough to make you wonder if, dare we say it, a CVT hooked to a 98-horsepower 1.4L engine might not be better. To say the throws are long and rubbery would be a compliment – they’re interminable and mixed in a viscous soup.

The brakes and steering lack feel and consistent weighting. The drop-off in power when you shift into second is more like falling off the cliff behind Parliament than sliding gently down the south side of Citadel Hill.

But it’s all rather comfortable and refined. Everything in your history with the most budget-minded economy cars prepares you for a shifter quivering with vibrations, a throttle pedal and headliner buzzing in synchronization with the engine, and noise from the engine, tires, and wind making its presence known et every moment.
The new Chevrolet Spark, however, has a very smooth 1.4L four-cylinder powerplant, happy to rev but never raucous. Wind noise, aside from a hot summer’s day with no A/C and windows down, is surprisingly hushed. Road noise is easily tolerated.

The seats are comfortable, too, and there is enough space for parents and two small people. Although buyers of $11,595 city cars surely aren’t terribly interested in adding another data package to their monthly expenses, you can make the Spark a WiFi hotspot for a fee. (It’s free for three GB or three months.)

Observed fuel economy was nothing special. We averaged 6.3 L/100km, equal to 37 mpg on the U.S. scale, over a week of mostly urban driving. That’s thrifty, to be sure, but we’ve seen similar fuel economy from larger, more powerful cars such as the Honda Fit and Ford Fiesta EcoBoost.

IS ANYONE BUYING IT?
Contrary to the belief that Canadians buy far more small cars than Americans – which is a belief based on reality – the first Chevrolet Spark sold 19 times more often in the U.S. than in Canada. The U.S. market is roughly nine times larger.

South of the border, U.S. sales of the new Chevrolet Spark climbed to an all-time high of 6659 units in June.

SHOULD I BUY SOMETHING ELSE INSTEAD?
Let’s ignore the reality of used cars for a moment, which always enter into the theoretical new-car-buying equation when the price drops below $15,000. Key rivals for the $11,595 Chevrolet Spark include the $11,588 Nissan Micra S and the $14,148 Mitsubishi Mirage ES. We would heartily recommend avoiding the Mirage, a three-cylinder car that feels straight out of third-world car production circa 2007, even if it’s discounted heavily.

The Micra, far more dynamically competent, is distinctly more fun to drive than the Spark. But the Micra is by no means as refined as the Spark.

Particularly at this time of year, as dealers begin to carry plenty of new model year stock, the discounts on remaining 2016 models will steadily become more enticing. This means you’ll want to consider moving up a category to something like a Hyundai Accent, Canada’s best-selling subcompact car.

Hyundai’s most basic 2016 Accent hatchback is currently discounted to $11,994. It’s much quicker than the Spark and much roomier, as well.

HOW MUCH SHOULD I PAY?
Don’t expect a “15% Off!” sticker on the side of the new $11,595 Spark at your local Chevrolet dealer. While you might find that kind of deal on a larger vehicle with greater built-in profit margins, there’s not as much room for movement on an ultra-basic car.

The lack of air conditioning below the Spark LS CVT’s $15,595 is a deal breaker for the inhabitants of GCBC Towers, but the Spark does make its most sense at the $11,595 base price. As the price climbs, the quality of the competition increases dramatically, and a $15K+ Spark appears underpowered and undersized.

WHAT’S THE VERDICT?
Having spent hundreds of kilometres driving the first-generation Chevrolet Spark to and from Prince Edward Island, quiet refinement was at the top of the list of things I didn’t expect to find in the latest 2016 Spark.

Sure, the shift into second gear produces a sudden drop-off in power, not that there was much to begin with. There is only room for two rear seats, so narrow is the car. The cargo area’s parcel shelf doesn’t move with the tailgate and it can’t stand up on its own. The Spark’s impressive ride quality is married to pitiful displays of body roll and an utter dearth of grip. The brakes lack feel, the shifter is among the worst I’ve ever experienced, and the car can’t track true on highways.

But you expect these kinds of characteristics in a sub-$10K car. You do not expect a 1.4L four-cylinder engine, particularly from General Motors, to be smooth and happy to rev. You don’t expect a quiet experience overall, a cabin free from vibration through the throttle, shifter, steering wheel, and headliner. You don’t expect solid build quality and doors that thunk.

Those are redeeming qualities. For seven dollars more than a basic Nissan Micra, the 2016 Chevrolet Spark LS offers a driving experience that feels like it should cost $2000 less. But the overall ambience feels like it’s worth $2000 more. You decide which matters more.

Timothy Cain is the founder of GoodCarBadCar.net, which obsesses over the free and frequent publication of U.S. and Canadian auto sales figures. Follow on Twitter @goodcarbadcar and on Facebook. The Spark was supplied by GM Canada’s press office.