Favouritism is not a healthy kind of thing. However, apart from and outside of my traditional, respectful, and unbiased journalism… I play favourites. And one of my favourites is Subaru. Subaru goes their own way, and I like that.

But this once; just this once, I need to pick on Subaru. Only as an example of a wider trend in the automotive world; only as a major caterer to consumer excess . This problem is not endemic to Subaru or its engineers. Nevertheless, their first SUV supplies fodder for my complaints as well as anything else on the road.

Subaru’s B9 Tribeca, a shot of which you see above, has been superseded by the Subaru Tribeca. No B9; no aero-inspired nose; and no complete lack of power. In other words, you now have a more traditionally named vehicle with a more conservative nose and a touch more zip.

Incidentally, the touch more zip comes with no extra sip. Subaru has upped the size of its flat-six engine (horizontally opposed cylinders, ‘boxer’ style, like a Porsche) from 3.0L to 3.6L, thereby increasing horsepower by eleven and torque by 32 lb-ft. This all adds up to a trucklet which does not offend with its snout – while also not standing out – and happens to offer no increasing offense to the green crowd because it uses no more fuel than its smaller engined, less powerful predecessor. Phew, long explanation.

What’s the problem? There’s no problem, per se. A slight conundrum. If automotive engineers, at Subaru and every other car company, are capable of making bigger; more powerful engines with identical fuel economy to smaller; weaker engines – does that not mean that the reverse should also be true? Make similarly sized engines; equal in force, with better efficiency?

Seems possible. Fueleconomy.gov shows the ’07 B9 Tribeca with the exact same city/highway ratings as the ’08 Tribeca. 16 city/21 highway for a combined 18 US mpg. The 2008 is approximately 600cc bigger in the engine bay. Had Subaru kept the size down and applied the same technology and mechanical know-how, how would the ’08 be rated at Fueleconomy.gov?

But we consumers would have none of that. While we all suggest that car makers and oil producers are kissing cousins, we also request more power. More power is one very good way to consume more fuel. Try it with your electricity company – turn on all your lights 24/7 for one month and watch your bill rise. Subaru has given us what we want – more horses under the hood with better efficiency. Yes, better efficiency. Think about it.

Run ten work horses around your farm for one hour. At the end your horses will want to drink. Let’s guess sixteen gallons of water. If you found another group of horses, thirteen strong, which could run around your farm in just 3/4 of an hour, finishing all the work your previous batch of horses completed, drinking the same sixteen gallons of water the previous batch did, would you prefer them? Of course. They’re more efficient. They drink the same amount, but do everything faster. Likewise the new Tribeca.

You thought I would condemn Subaru. Nah, they’re just supplying North America with the vehicle North Americans want. Is it time for more fuel efficient cars and trucks? Yes. But we still want our power; society’s willingness to sacrifice has not hit the automotive mainstream yet. We can’t blame Subaru for giving car buyers exactly what they requested, even if Fueleconomy.gov had little to update on their Subie page. 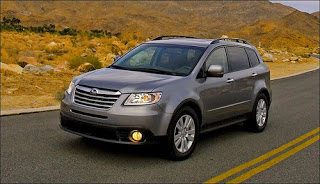