First for the red news: 180,000 Honda Civics from model years 2006 and 2007 have been recalled due to a potentially serious fault in the wheel bearing seal. To get

down to where the tire meets the road, Honda says that no injuries or accidents have been caused by the problem yet, but the dangerous end result would strike right where the tire meets the road. When the wheel fails to meet the car. In other words, if you drive an ’06 or ’07 Civic, talk to your dealer or follow up on the letter Honda sends you. Don’t let your wheel fall off.

Chrysler, on the other hand, is dealing with very large numbers. Jeep’s Grand Cherokee, the Dodge Nitro, and Jeep’s Wrangler and Commander are all involved in a recall related to their electronic-control unit and a momentary delay in braking under certain uphill circumstances. Chrysler has been made aware of one accident that may be related, and knows of no accident related to a Dodge Avenger/Chrysler Sebring problem with door latches and locks. The Avenger/Sebring recall will affect 72,333 cars, while the SUV recall will result in 296,550 owners requiring a dealer visit. Nothing hurts the bottom line more than recalls. Although Honda will assuredly remain in the black into the future, this is very red news for Chrysler LLC. 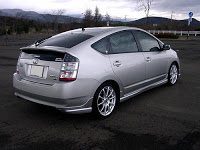 My question is, when will they recall the Jeep Commander to fix its ugliness?

Now for the green news: Hybrids are selling at a 49% higher rate than last year in America. Oklahoma saw a 143% increase in hybrid sales in the first six months of this year versus 2006. Hawaiians bought fewer hybrids from January through July than they did the previous year, but were conspicous in doing so. 49 other states bought more hybrids. Attribute much of this to greater availability, some of it to gas prices, and some of it to the lack of availability of the clean and powerful diesels Europeans stick in their BMW’s, Audi’s, and even Honda’s.