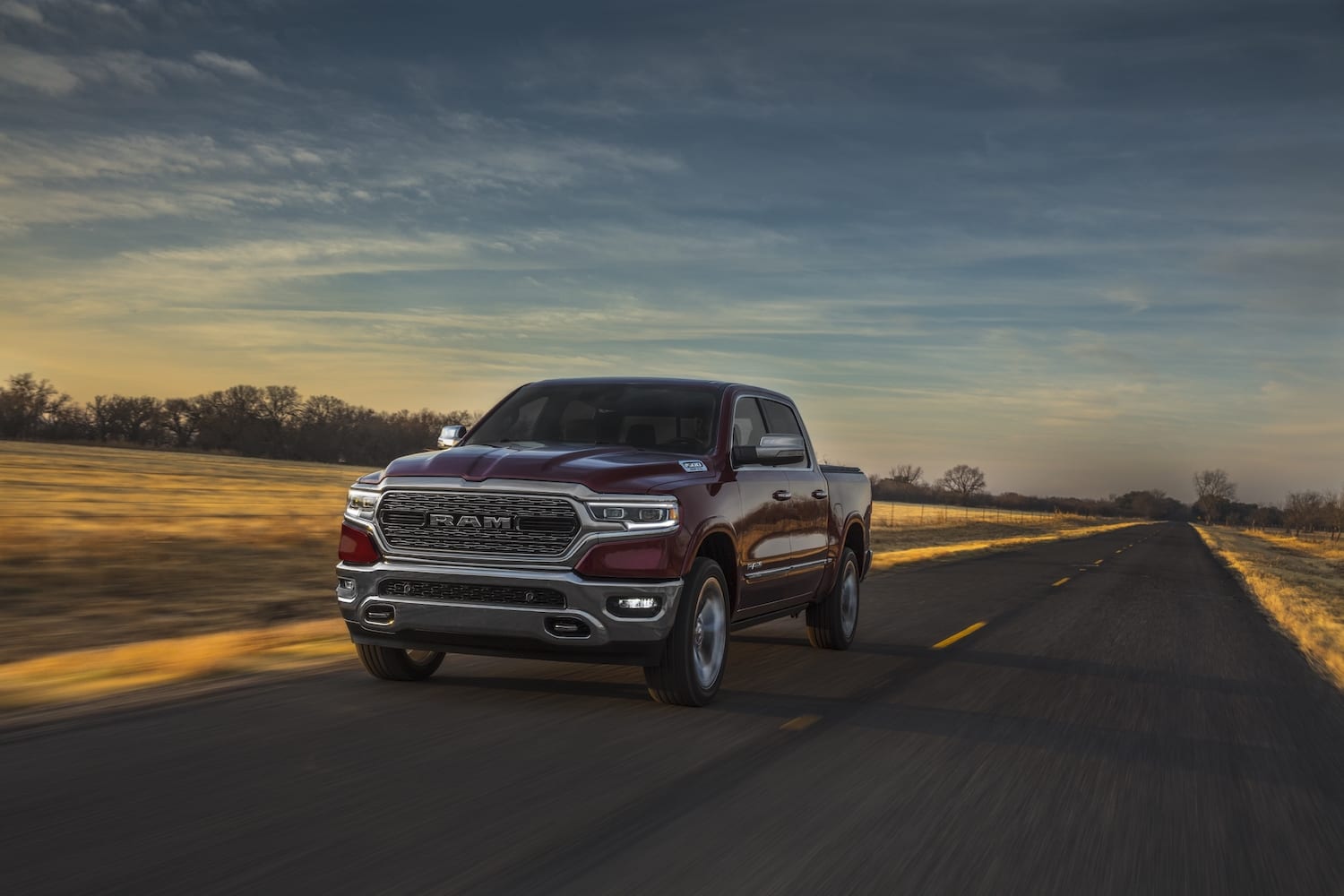 Here's a look at how

Ram’s Sales Show a Shift in the Truck Market

Ram released its new Pickup, and the truck is making waves. I drove the truck at the press event and came away impressed with the model. In that first-drive review of the vehicle, I said, “Ram truly brings trucks into the modern age.” I stand by that statement today. However, this truck has done better than I ever would have imagined. Ram’s sales are booming.

Marketshare for Ram also increased. It went up by more than 16 percent, meaning Ram is connecting with more consumers nationwide. It’s easy to see why this is happening. The truck is, to put it plainly, better than the competition. It’s a truck that will literally reshape the truck market.

With electric trucks on the horizon, the truck industry is in for a serious shake-up, but even before electric trucks hit, Ram has already changed things for the conventional truck market. And you know what, this isn’t the first time.

This Isn’t The First Time Ram Changed the Truck Market

Up until the mid-1990s, trucks were seen as more-or-less work vehicles. Sure, they were often used to move families from place to place, but they were almost exclusively owned by working-class folks who really needed a truck for their day-to-day activities. Dodge (which later became Ram) changed that with the introduction of the 1994 second-gen Ram pickup.

The truck was named Motor Trend’s “Truck of the Year” in 1994, and the brand’s slogan for the model was “The rules have changed.” It was an accurate claim. Car and Driver called the truck a “barrel-chested gorilla of a truck.”

The 1994 model could be had in the lowly Work Special trim level, but it could also be had in LT, ST, and Laramie SLT. The Laramie SLT was a truly luxurious truck and it changed the way people looked at pickups.

The interior of the Ram Laramie SLT wasn’t only more luxurious than other pickups, it was also more advanced, the center console/armrest was large enough to store a laptop, which was a first. Pair that with many other luxury features we now take for granted like cloth interior, power windows and locks, and an AM/FM cas­sette radio.

It wasn’t just the interior that set this truck apart. The way it looked and how it drove were both important factors for this pickup. Every publication that reviewed it likened the styling to big-rigs and also compared the truck’s performance and driving characteristics to sedans of that same time period.

In short, the second-generation Dodge Ram was a revelation for the pickup truck world. It drove better than other trucks. It was more comfortable than other trucks, and it looked more impressive, too.

Dodge made a pickup that was designed to be owned by anybody. It was a bit more of an aspirational vehicle than any other common truck before it. It could also do everything that a truck needed to do and well. It was, for lack of a better term, the best of both worlds between a full-size truck and a car.

It forced Ford and Chevrolet to innovate, and I’d argue that it made all trucks better. This most recent Ram Pickup manages to do a similar trick.

Ram Does It Again

As I said above, the second-generation Dodge Ram changed the truck industry. Well, this new Ram Pickup, specifically the 1500 model follows the same playbook. It is not only a darn good truck, but it changes what people think of when they think of a truck. It does this in a few different ways.

It’s About the Interior

The interior is really what sets the Ram 1500 apart for me. The interior, even in the lower trim levels is just really nice. Climb the trim-level ladder, and you’ll find some of the best leather and interior materials in any non-premium badged vehicle.

The leather on the seats, and dash is top quality. There’s real wood trim in some trim levels, there’s real aluminum in others, and there’s tons of room in both the front and back seats of the truck.

Five large men can sit comfortably in the Ram 1500, which is a must if you’ve ever been to any American blue-collar worksite, and honestly needed if you’ve looked at the average American household these days. People are large now, and Ram is here to serve them.

In addition to the interior fit for large-bodied royalty, there is also plenty of technology in this truck at all trim levels. FCA, which owns Ram, has one of the best infotainment systems in the industry with the Uconnect system. It’s in its best form in the Ram 1500 with Apple CarPlay, Android Auto, Navigation, Bluetooth, and more. You can get a 12-inch screen, too. Heck, even the downgraded screen measures over eight inches.

There are also plenty of charging ports, storage bins, and over 100 safety and security features on the properly equipped models. This includes multiple camera views, specific towing technology and alerts, and more. Ram made the interior full of stuff, and it made it pretty easy to use, too.

It’s a Bit About the Exterior

Ironically enough, Ram seems to have pulled the same trick it did in the 1990s with the second-generation Dodge Ram. If you look at Chevrolet and Ford’s current pickups, they’re going for a more boxy and square-jawed look. Ram has rounded the edges and made the vehicle a little more streamlined.

The end result is less muscular-big-rig like the 1994 Ram and more of a sophisticated and attractive vehicle overall. I know styling is subjective, but there’s something more approachable about the Ram’s exterior. It is certainly a masculine design, but it doesn’t seem so in your face like Ford and Chevy’s trucks are. The Ram manages to be both strong and rugged-looking without going over the top. In my book, Ram is winning here.

The Truck’s Capabilities Help, Too

The Ram 1500 can tow up to 12,750 pounds when properly equipped. That’s a lot. Ford and Ram will tell you that’s not class-leading, and they’d be right. However, I’d argue that it doesn’t really matter. Few 1500 truck owners ever tow that much.

The ones that do, buy heavy-duty trucks, and at that point, Ford and Ram still win, too, but the measuring contest of who can tow a few hundred more pounds here or there is a little less important. As long as your Ram truck can tow your camper, horse trailer, or boat (which it can) you’ll do just fine.

The fact of the matter is Ford, Chevy, and Ram all make trucks that can tow around the same number. Ford and Chevy’s trucks can tow more. If it matters to you to have the truck that can tow the absolute most (or you actually need it for what you do day-to-day), then go with the truck that will best suit your needs (the Ford Super Duty). Otherwise, just get the one that will be the most satisfying and still be able to get the job done.

The diesel is a great option and one I’d seriously consider. That said, the eTorque technology is new and innovative. It’s a mild hybrid system that makes the truck more lively off the line and more fuel-efficient. With all of these engines to choose from, it’s clear that you should have no problem finding what you want. It’s important to note, though Ram is the only of the big companies to offer a hybrid pickup right now.

Capabilities come from other areas of this truck, too. I can’t leave out the Ram Box storage compartments. These have been around a while, but they’re extremely handy. Pair that with the fact that Ram has a fancy new Multifunction tailgate, and you have a truck that is more user-friendly than the other trucks out there.

The Other Manufacturers Will Catch Up

Ford, Chevrolet, and GMC all know that Ram has captured the truck consumers’ attention, and they need to try to win it back. GMC even has a few tricks up its sleeve right now with its CarbonPro bed and MutiPro Tailgate, but those aren’t enough. These three automakers need to up their game.

Ram’s new truck is selling faster than Ford, Chevy, and GMC trucks, and Ram did that in an industry that saw roughly 400,000 fewer vehicle sales in 2019 than it did in 2018. I would expect Ram to continue to see sales growth and continue to gain marketshare in the coming months.

Other truck manufacturers will come around to making their pickup trucks as good as Ram’s, but at the moment, they’re behind. The real question is, how close can Ram get to the segment leader—the Ford F-150—before Ford is able to put out a truck that will help it make up some of the ground it has lost? Ram has already passed up Chevy, and it left GMC in the dust a while back (although GMC’s sales are actually up).

Ford and Chevrolet are already hard at work at their next-generation pickups, and I have little doubt that they will deliver trucks that are top-quality machines, but with electrification playing more of a role and Ram with a lot of momentum, it will be interesting to see how Ford and GM respond. I’m looking forward to seeing how much Ram will have changed the future Ford and GM trucks.

More than a quarter decade from the company’s last truly innovative pickup, Ram has used a familiar playbook to reshape the truck market, and all trucks will be better for it. Good for Ram. Ram’s Pickup Is Reshaping the Truck Market