General Motors has decided not to import the Holden Commodore VE Sportwagon, projected to be sold as the Pontiac G8 Sportwagon. So says GM product boss Bob Lutz. He figures the interest isn’t present in the American marketplace and the cost of meeting regulations would be too great, anyway.

Daimler, better known for its Mercedes-Benz brand, owns 40% of racing outfit McLaren, the maker of the Benz SLR supercar. In order to gain full control of the company, Daimler could buy out Ron Dennis (15%), Mansour Ojjeh (15%) or Mumtalakat (30%). Expect them to find the perfect formula soon, ending up with 55, 70, or 100% of the company before long. 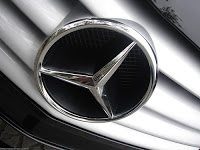 Dirk van Braeckel has won the award for top Euro design; the European Automotive Design Award. Dirk is the head of Bentley’s design team, a Belgium native, and inspired by Ralph Lauren. Good inspiration, I say.

This week’s nod to excellent linguistics goes to Volvo’s contrasting seats available in C30’s, S40’s, and V50’s with the R-Design package. Says Volvo Canada’s press release: “…seats will be in off-black Vulcaflex with the seat cushion and backrest in contrasting cream-colored leather.” Vulcaflex.

Although the German auto market stumbled in 2007 (largely due to a sales tax increase), overall European sales rose. BMW and Fiat are largely responsible, as is the nation of Italy as a whole. Fiat’s sales rose 7.1% to 1,250,000 automobiles, while BMW sales climbed 6.7% to 848,080. Germans still buy more new cars than any other national purchasing group in Europe, but Italy took hold of the number two slot, just in front of the UK and leaving French sales a half-mil cars abaft.