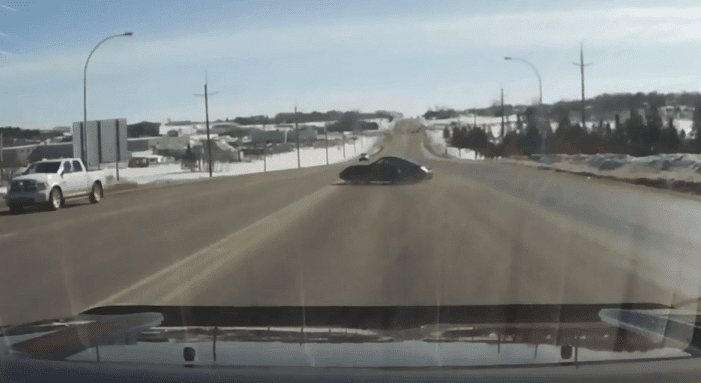 GCBC’s deep connections to Prince Edward Island cause us to pay particular attention to a video on one of the island’s few four-lane roads, a bypass outside the capital of Charlottetown, in which an exceedingly rare Porsche Cayman goes completely mad. It’s like watching a dog eat a spicy onion after being told he must take a bath with the neighbour’s cat.

One would assume the driver was drunk. Or perhaps too high to drive. Or suffering from some inexplicable physical ailment. Or the car completely lost its… everything.

While the video would be notable regardless of the vehicle, it’s especially noticeable because it’s a Porsche Cayman. On an island literally made of red dirt. It’s a veritable sandbar.

There are only 140,000 people in PEI; nearly half that many in the Charlottetown “metropolitan” area. PEI makes up just 0.4% of Canada’s population and generates slightly less than 0.4% of Canadian new vehicle sales.

Canada, a low-volume auto market by the standards of our southern neighbour, has only seen 1695 Porsche Caymans registered since the first-gen model arrived in 2006. The U.S. auto market, which is usually about nine times the size of Canada’s, buys 17 times that many Caymans. With PEI accounting for just 0.4% of the market, a simple extrapolation suggests that only seven Caymans have ever been brought to the Birthplace Of Confederation as new cars. (Silly Islanders, they didn’t actually join Canada until the country’s six birthday.)

I suspect there are more than seven Caymans in Prince Edward Island, though none would have actually been bought new in PEI – the closest Porsche store is the Steele-owned store in Halifax, Nova Scotia.

Neither are there any Mercedes-Benz, BMW, Lexus, Acura, Jaguar, Land Rover, Volvo, Infiniti dealers in PEI. Even without the dealers and with all the salt and with all the salt air and the harsh climate, it’s an island full of auto enthusiasts, hard-driving motorcycle riders, and generous owners of all-electric performance cars. There are just as many Caymans now as there were yesterday morning – the car is likely not finished. But once Charlottetown’s police force identifies the Cayman owner from this dashcam video, there may be one less Cayman driver in Prince Edward Island.