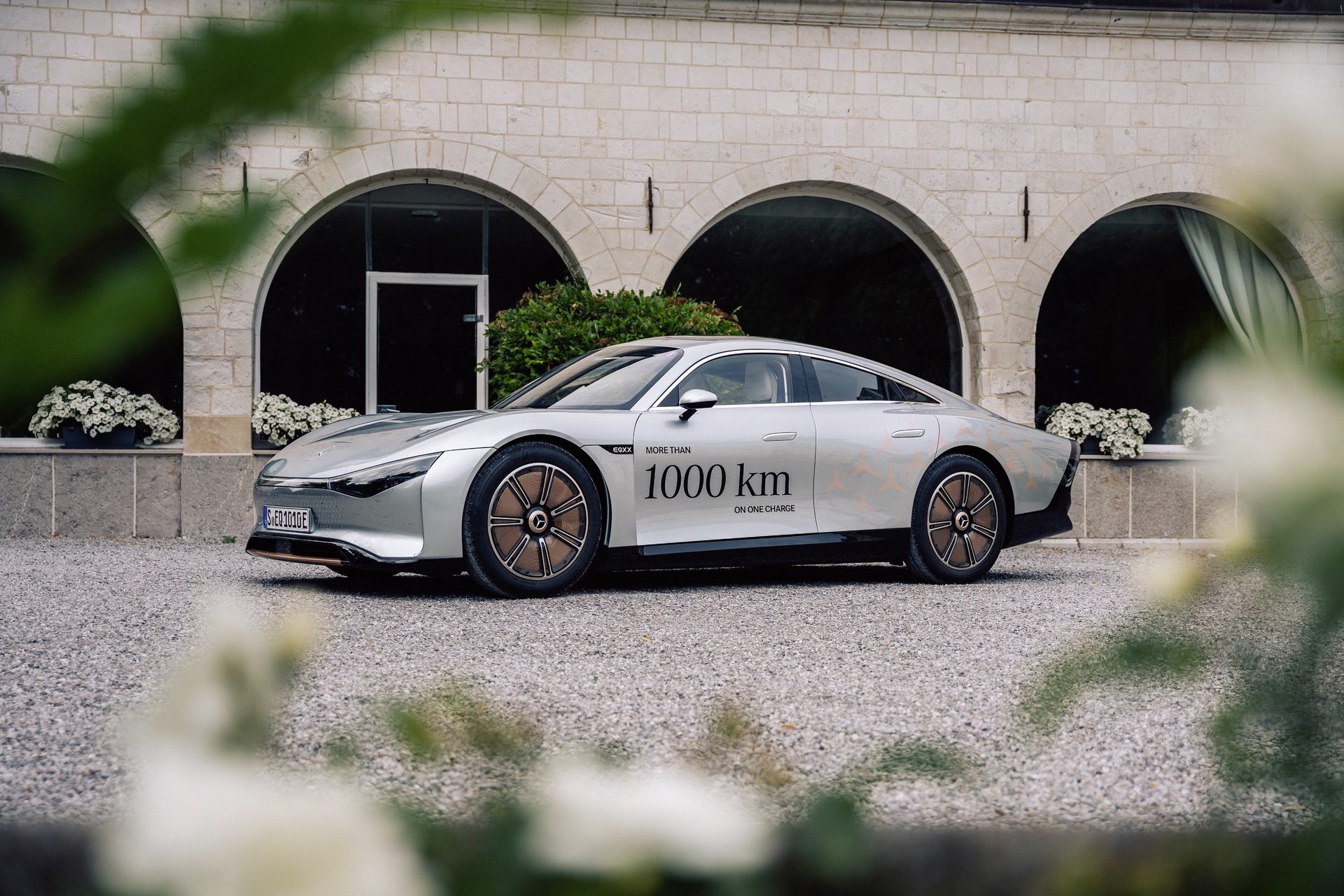 Mercedes-Benz is not a name that one thinks of when discussion of electric vehicles comes up. Audi and VW are the bigger names in Germany, while Tesla, Rimac, and Lotus are the names that come to the tip of the tongue when thinking about performance EVs. For all intents and purposes, while Mercedes has been pursuing hybrids for a while, it seemed like they were going to wait out the first major push in the industry for EVs.

That made the announcement of the Mercedes EQ program entering production in 2018 a bit of a surprise, and the further announcement of planning to have ten vehicles under the EQ branding by 2022 even more surprising. Three of those cars are under the Smart badge, while seven are under Mercedes-Benz or Mercedes-AMG. They met their target in 2021, becoming an established manufacturer of electric vehicles.

Yet, that wasn’t enough for Mercedes, and now they are pushing towards the holy grail of all electric vehicles: a proper long distance GT model. To this end, they developed the VISION EQXX prototype. To understand just how revolutionary the EQXX is, we must first take a step back in time to see how the EQ program as a whole came to be.

History of the Mercedes-Benz EQ Program

The Mercedes-Benz EQ program comes from, of all places, motorsports. Feeling like the brand was needing a refresh to remain relevant, the AMG arm of the company bought up the Brawn GP team in Formula One after the 2009 season had ended. Partnering with Malaysian oil giant Petronas, the team became Mercedes-Petronas Formula One and quickly started developing their race cars.

For the first four seasons, the cars were decent, but were not the all-conquering monster machines that Mercedes had been hoping for. Still, it did raise the company’s profile, and some of the newer petrol-powered AMG models since 2012 have come as a result of lessons learned on the race track. It was in 2014, however, when the V6 Turbo Hybrid era started in F1 that Mercedes hit the ground running.

It was quickly apparent that while many teams were struggling to make their V6 Turbo Hybrids reliable, Mercedes had engineered, designed, and built one of the most reliable and powerful engines on the grid. They also dominated in the area of aerodynamics, making the Mercedes-Petronas AMG F1 cars nearly unbeatable. The results, if you are a fan of Formula One, are readily apparent. From 2014 to 2021, Mercedes won every drivers championship and constructors championship—7 times with Lewis Hamilton and once with Nico Rosberg.

Not long after the start of their dominance in F1, the Mercedes-EQ program was announced with a prototype vehicle, the Generation EQ, in 2016 at the Paris Motor Show. Intended to combine Mercedes luxury with an electric drivetrain, it succeeded at garnering interest and was enough for the company to push ahead with the research and development needed to bring an actual EQ vehicle to the market.

After the first car, the EQC, emerged in 2018, Mercedes doubled down—first by announcing the addition of 9 more models to be on the road by 2022, and then following up with the formation of the Mercedes-EQ Formula E team. Formula E, or Formula Electric if you prefer the full name, was started in 2014 as a showcase motorsport to demonstrate the performance of electric vehicles racing on tight, twisting city circuits.

It was granted championship status by the FIA in 2018, which drew the interest of not only Mercedes, but Porsche as well, and both entered the 2019-2020 season with new teams and their own cars. This also drove forward research and development of performance road cars, with vehicles such as the Porsche Taycan Turbo S and the Mercedes-AMG 53 EQS electric sedan with 751 HP as results.

Yet, while Mercedes was able to extract a lot of motive power from the electric drivetrains, range was still the big hurdle for almost every EV manufacturer. Ranges of 300 to 400 miles (483 to 644 km) were rare, and were exceptional for many manufacturers, usually requiring a dedicated “long range package” to be selected when purchasing an EV. Mercedes realized that something needed to be done.

The VISION EQXX: The Shape of the Future

In early 2022, the VISION EQXX was revealed to the world. Shaped by computer fluid dynamics and hundreds, if not thousands of hours in the wind tunnel at the Mercedes-Petronas F1 development center in Brackley, England, the car is one of the most aerodynamically slippery vehicles ever made. This is extra-astounding since it looks, apart from a few areas, like your regular run-of-the-mill AMG sports sedan.

The important figure in aerodynamics is known as the “Coefficient of drag,” or Cd. If you take a standard hatchback off the road—like a Ford Fiesta, a pretty aerodynamic car as is—it has a Cd of 0.3. Think of it as sticking your hand out the window while driving on the freeway, and turning it so your palm is facing into the airflow. It pushes back against your hand quite hard, as that is a Cd of about 0.8, albeit on a small area. The higher a Cd a shape has, the more it is slowed down and pushed against by the air it is passing through.

The VISION EQXX, on the other hand, has a Cd of 0.17. For comparison, a Tesla Model S has a Cd of 0.24, despite all the aerodynamic shaping of the body and underbody. The Mercedes is, in fact, the most aerodynamic car ever designed.

Two things come together to make this happen. The first is that the front of the car is unbelievably smooth, guiding air around, over, and under the car instead of pushing it. There will always be some resistance, but by letting the air flow as smoothly as possible over the hood and body, and by keeping open holes to a minimum, the car becomes a hot knife to the butter that is the air around it.

The second thing that makes the car so aerodynamic is the tail. Known in car design as a speedtail, the lower double diffuser of the rear and the way the air flows over the rear top lip of the tail of the car combine to eliminate as much of a vortex as possible behind the car.

The air under the car and the air coming off the tail want to curl inwards and churn behind the car, but the smooth shape and the airflow going through the secondary diffuser, pushing it up into that vortex space, cause the air to flow off the back instead and reduce the suction pressure that would otherwise add drag to the car.

What might surprise you even more is that the EQXX is not a light or particularly powerful car. It weighs in at 3,869 lbs (1,755 kg) and produces 240 HP equivalent. Its battery pack has less than 100 kWh of power (they are tight-lipped about the exact number), but it does run on a 900 Volt internal system—that much is confirmed.

The Record: How the VISION EQXX Drove Over 1,200 KM on a Single Charge

In April 2022, the VISION EQXX drove 1,008 km (626.3 miles) from Stuttgart to the French town of Cassis on a single charge, and still had a little energy left at the end. This was the first time an EV had gone over 1,000 KM on a single charge, and it set a record at the time. But Mercedes wasn’t happy with just that and wanted to push the car to its absolute maximum range.

As such, in the lead up to the Silverstone Grand Prix, the VISION EQXX was topped up to a 100% charge in Stuttgart and headed NorthWest. Expecting to be able to cruise the Autobahn all the way to the French border, the EQXX faced its first hurdle just a few kilometers outside of Stuttgart.

The Autobahn had been closed for repairs and required a diversion through a hilly part of the German countryside. There had been no announcement until the morning of the closure that it was happening, and despite all the checks and preparation the EQXX team had done, they missed that crucial notice.

Once back on the Autobahn, the EQXX cruised efficiently down the outside lane at 100 kph (62 mph), its optimal speed for thermal management and energy efficiency. It entered France near Strasbourg and then cruised, without needing to stop at all, at highway speed from the border to the port city of Calais. During this part of the trip, speeds varied from 60 kph (37 mph) through towns along the motorway, to 110 kph, the standard highway speed in France.

The car boarded the EuroTunnel train in Calais, traveling under the English Channel to Folkestone, England. During this part of the trip, the car was fully powered down, to replicate the real experience of a typical driver, meaning the batteries and motors started to cool down.

Once in Folkestone, the car started back up, and drove up the M20 motorway to the M25. Driving all the way around London on the M25, the EQXX then drove to Brackley, where it visited Mercedes-Benz Grand Prix headquarters. This is where the engineers and designers that had participated in the project were located, and they were able to hold a short celebration of the journey.

13 kilometers (8.1 miles) to the NorthWest of Brackley is the world-famous Silverstone Circuit, home of the British Grand Prix, home track of Mercedes-AMG Petronas F1, and the final destination of the VISION EQXX.

By making it to Brackley, the car had already beaten its previous record, but it drove on to Silverstone, where it was met by Mercedes-EQ Formula E driver Nyck de Vries. He was then tasked with draining the car’s batteries to empty around the 5.891 KM (3.661 miles) Grand Prix layout.

Taking the car to its maximum speed of 140 kph (87 mph), de Vries completed 10 full laps without thinking about being gentle to the car at all, bringing it into the pits at the end of the 11th lap with 1% showing and a low battery warning.

The car stopped in its pit box, and the motors were shut down, but the screens were left active so that the dash photo could be taken. The trip computer, verified against a separate GPS tracker in the car, showed the distance traveled as 1,202 KM (747 miles).

That alone set a record for the farthest distance traveled on a single charge by an electric vehicle. The VISION EQXX also set an efficiency record, with an average speed of 83 kph (51.6 mph), and using 8.3 kWh per 100 KM (7.5 miles per kWh). Keeping in mind that most EVs average 18.8 to 17.2 kWh per 100 KM (3.3 to 3.6 miles per kWh), the EQXX proved to be over twice as efficient and set a record for its efficiency.

What makes this all the better is that even after it reached its destination, the entrance gate to Silverstone, it had enough battery power left to complete another 64.8 KM (40.3) miles while being driven in anger, at its top speed, around a race track with a professional motorsports driver behind the wheel. All while looking like a slightly more aerodynamic version of a Mercedes-Benz CLA.

This record shows that we are, as a community, on the very cusp of true long range EV cars, and Mercedes has made the electric holy grail attainable—a Grand Touring EV. The next few years in electric vehicles promise to be exciting!