Laying in wait in the grasp of the future; many strange automotive events prepare. General Motors is rapidly becoming the New GM. (And how annoyingly.) Hummer might be Chinese. Then again, it might not. Will Porsche swallow Volkswagen, or will they just merge? 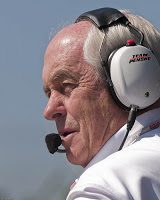 Could Europe’s – perhaps the world’s – preeminent small car manufacturers become one? Peugeot-Citroen, otherwise known as PSA, is open to talks with Fiat about joining forces. Already Land Rover and Jaguar are Indian-owned; what could happen with Ford-owned Volvo?
One thing is settled… at least for the moment, as all these things tend to be. Roger Penske’s company, known to you all as, well… Penske, is ready to take Saturn into the second decade of this century. Penske does more than racing. He/it also owns a multitude of car dealerships, a massive truck fleet, and VM Motori S.p.A. Will the cars be badged like the Aura pictured here? Undoubtedly no. However, this man knows how to win races, lease trucks, sell cars, and apparently build Italian diesels. And he does so rather successfully. If anyone’s to be entrusted with turning Saturn around, Roger Penske doth appear to be the man.