Toyota produces a lot of very high quality, long-lasting, durable vehicles. When I say ‘a lot’, I think you understand that I mean: plenty, loads, tons.

In fact, it’s more than likely that this year Toyota will sell more cars globally (including its sub-brands like Lexus and Scion) than anybody else worldwide. Pay attention to the automotive media, however, even sites like GoodCarBadCar.net, and you’ll hear plenty about Toyota’s great cars that do nothing for the soul. To drive is not to thrill.
It may be a fast Lexus or an efficient hybrid Toyota – but it still may not come close to creating exciting ownership experiences. That’s not to say your experience won’t be positive. But memorable? Something you’ll tell your grandchildren about the same way your great uncle endlessly describes his ’57 Chevy or your older cousin describes his ’84 Volkswagen GTI? Not so much.
And so here you have the brand spankin’ new Toyota Avensis. In North America, Toyota makes good use of its best-selling Camry. Across The Pond, Toyota attacks that market with the very different Avensis. We see Corolla, they see Auris. The Avensis, like Ford’s Mondeo, comes across as slightly smaller than the typical American midsizer, even when dimensional differences are slight (less than 8 inches in length, less than 3 inches in wheelbase).
The greater take-home fact regarding the Avensis, though, is the nature of its excitement level. Like the Camry, Toyota designs and equips the Avensis to be a terrific car to own, but driving is secondary and image is an afterthought. The images below show the first and second-generation Avensis, just to make sure you understand the dull nature of this admittedly good (smaller-case g) car. 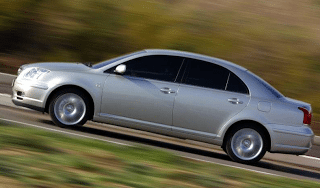