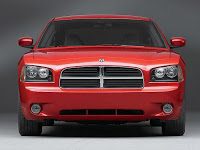 The importing from Australia of a Holden to be sold as the Pontiac G8 has cast the Dodge Charger in a different light. No longer the sole large muscular American sedan, the Charger must feel prematurely outdated.

Perceived as direct competitors, the rear-wheel drive; V6 or V8 G8 and Charger are aligned against a very different segment of car buyership than the typical new midpriced sedan. From the same brands you could buy a G6 or Avenger, two cars that fail to win hearts but do constrain themselves to more commonly accepted 21st century shapes. Front-wheel drive with a four-cylinder or V6 engine, the option of being very inexpensive or decently priced & well-equipped… sounds just like America’s best-sellers. That’d be the Toyota Camry and Honda Accord. Though you may find a bunch of consumers willing to cross-shop the Japanese dominators with the prototypical American vehicles – it’s not the norm.
So, with the advent of the oft-hyped Pontiac G8, it bears reminding just what the Charger is like. With fuel prices rising rapidly and optional V8 engines being regarded as unnecessary excess, what about the garden-variety Charger. Yeah, it’s the one the car magazines never bother to run in a comparison test. It won’t appear in YouTube backroad tire burning sessions. And, despite its crosshaired grille (consistent with its R/T and SRT8 brethren), the 3.5L V6-engined Charger doesn’t look exciting in the least.
Chargers labeled as ‘SXT’ are delivered with a 250bhp, 250 lb-ft 3.5L V6. This puts you down about 90-100 horsepower compared with the base V8, a 5.7L from the R/T. Canadian Chargers start under $20,000, but the SXT starts just under $24K. Finally, a case where price makes sense across the border: Americans pay more for the equivalent Charger SE and SXT. Equipment and trim differences could wreak havoc with the comparison, but consumer watchdogs ought to pay heed north of the border.
Recalling the earlier introduction of the Chrysler 300, it won’t slip anybody’s mind that the Charger is a very large car. It’s not uncommon for American cars from the end of the last decade to frequently feel larger than they actually are. A previous-generation Ford Taurus would frequently feel as though it’s an 11/10ths version of itself. Fortunately for Charger drivers, the Dodge makes itself feel smaller when really pushed; but not significantly so. Perhaps 9/10ths of itself is an apt description.
Don’t count that to the steering’s credit. Squishy, lacking feel, and with too great an on-centre dead spot, the rack is the biggest letdown on the Charger SXT’s dynamic resume. One doesn’t enter a large, rear-wheel drive family sedan expecting ‘handling as if on rails’ or ‘ready for the track’ suspension. Nevertheless, the Charger seems to have surprising potential, something the G8 delivers on in some measure where the Charger lets you down at the last instant. We’re not talking about hard charging down a mountain road and finding understeer at the outer limits. This is just everyday enthusiastic driving, discovering that the Charger isn’t happy where you desperately wish it would be.
That isn’t to deny its supreme comfort and space. The living room sofa in the rear passenger area should suit the in-laws. A large dashboard and arm-stretching space up front give the Charger a regal aura, at least when it comes to highway cruising.
Indeed, that’s where the Charger is at its best. Your cross-country trip this summer would be rather enjoyable inside a V6 Charger. Judged by Transport Canada to use 8.1 litres every 100km of highway driving (Fueleconomy.gov says 24mpg on the highway), the Charger provides an awful lot of interior breathing room for not-terrible economy.
As judged by the name of this website, the Charger won’t be considered a bad car. Available in multiple varieties (all-wheel drive, smaller V6, big V8 or bigger?), there likely is a Charger for a huge swath of the population. Fuel prices aren’t going to help its cause, nor is constant uncertainty floating around the Chrysler/Dodge/Jeep names, whether its relating to quality or bankruptcy. People like to buy products they can feel confident in, and presently there’s little reason to feel confident in Chrysler LLC headquarters.
However, the purchase of a Charger in the USA presently comes with less expensive gas. $2.99/gallon is looking downright dirt cheap to most Americans. Is the Charger worth a look? Sure, if you’re in the market for a large sedan, the Dodge Charger SXT would serve you well. Does the Charger garner status as an all-time great – maybe even a current great? No, there are better options elsewhere, not least of which is at the Pontiac dealership.