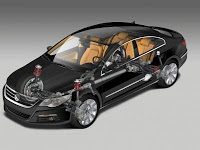 Countless dozens of cars have appeared at dealerships in the lifetime of The Good Car Guy that forced a complete turn around of previous beliefs.

The first sighting of a Lamborghini Countach resulted in a, “I still want one, but man, she ain’t pretty”. Unless painted black, the latest Chevrolet Malibu isn’t nearly as handsome and classy as first believed. BMW’s latest M3 is still a little too soft, but a whole lot more aggressive in the flesh than in photos. Chevrolet’s first-generation Avalanche wasn’t good to begin with but became absolutely wretched during a drive-by.
Two of the most recent examples are positives, however. With great love for the Mercedes-Benz CLS, The Good Car Guy wanted to love the Volkswagen Passat CC, too. The CC is, after all, a Mercedes CLS on the cheap. Alas, in pictures, the Passat CC was bloated and disappointing. Considering the Passat wagon was a better starting point than the Passat sedan anyway, one couldn’t be too surprised.
Likewise, the Lincoln MKS was such a departure from the direction GoodCarBadCar.net believed Lincoln should go.  That direction? The Lincoln Continental concept of 2002 was all-American goodness. The MKS is a Euro-Japanese amalgam of ideas mixed with a nasty grille.

However, in hindsight The Good Car Guy wishes a little more softeness had been used in describing these two vehicles. After witnessing a few MKSs drive by in urban situations (without being able to see the front end), the Lincoln has some serious presence and looks expensive. Will the MKS manage to garner a Good 12 spot? No, but it’s far from The Bad 8.
The story is similar for Volkswagen’s Passat CC. Looking long, low, and lean in real life, the CC actually fulfills its Benz-CLS-on-the-cheap mandate rather well. Nah, it’s not a recommended purchase – there’s just too much better stuff available for the price – but the CC isn’t ugly in the metal. It’s quite nice.