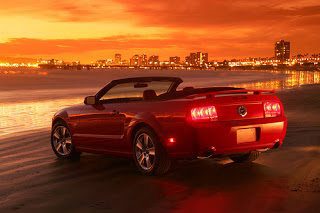 MUSTANG IS ONE SAFE PONY

Are muscle-car consumers willing to be marketed to by safety accolades and crash test performance? What about convertible buyers? Don’t they buy cars because they’re pretty and fast and the latest it car?

Bet on Ford having something extra to tell you when they ramble on about placing you in a convertible with 210 or perhaps 300 or even 500 horsepower. Now, if that hoppity-skip rear suspension sent you headling into the ditch or into oncoming traffic, you’d be driving the safest convertible on the road.

Yep, that’s right. The Ford Mustang became the first convertible to ever earn five-star ratings in the following NHTSA crash tests: front crash safety for driver and passenger, side impact safety for passengers front & rear, and rollover resistance. Beginning with ’08 Mustang’s like the ones in these tests, all of Ford’s pony cars have side-impact airbags. Be ye not mistaken, although the picture indicates otherwise, Mustang’s are not safe in water.

Speeds in these tests are as around 35-38.5 miles per hour. Keep two things in mind: The Insurance Institute for Highway Safety rated the Mustang drop-top ‘poor’ for whiplash protection. Secondly, the convertible fared better in these tests than Ford’s Mustang hardtop, whose side impact score for rear passenger safety was a star lower than the convertibles.

I find this news particularly pleast. That time The Good Car Girl screamed as we rounded a corner and entered an on-ramp in a red Mustang GT with its rear-end practically beside us…. well, what did we have to fear? Five stars, baby. Five stars.