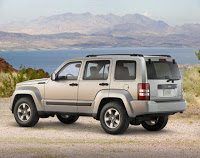 So the F-150, Toyota Tundra, and some General Motors vehicles are struggling to escape dealer lots. That’s not news to you. The actual statistics surrounding vague statements like that mentioned two sentences prior could strike fear into the hurt of a vehicle sales consultant, statistics available for the reading with a click on this link. But it’s not news; not in the traditional sense.

5,118 – gap in sales between the better-selling Ford Mustang (even with its 28.8% drop in 2008.5) and the Ford Explorer
26.8 – percentage drop in sales in the first half of this year for the Dodge Grand Caravan while the minivan market is down about 19% and the small Mazda 5 is up 44.1% over the first six months of ’08
7.6 – average number of cylinders under the hood of a Chevrolet Silverado, accounting for all five engines available; a large reason its sales are down 26.8% in the first half of the year
53.5 – percentage drop in Chevrolet Impala sales in June, compared with June of ’07
226,000 – supply of F-series pickups held by Ford Motor Company as of June 1st
18.4 – percentage drop in sales of the Jeep Liberty in the six months ending June 30th