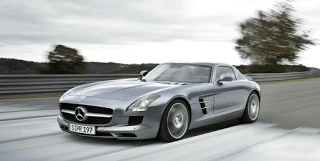 By no means a traditionally beautiful car, the 2011 Mercedes-Benz SLS AMG makes good use of alluring proportions and gullwing doors to draw the eye(s) of online onlookers around the globe.

The successor to the SLR McLaren (a car Mercedes-Benz and McLaren could never agree on) is an in-house development; ironically debuting with its full motherload of pictures on the same day as the McLaren MP4-12C. It’s hard to argue about pedigree when one car, the McLaren, inherits the genes of the best supercar of all time, the McLaren F1, while the other, this SLS AMG, can look back over a hundred years of phenomenal machinery. 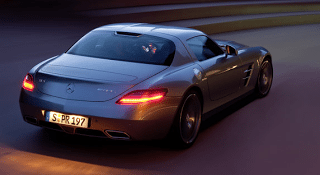 Besides, if you have the money to have one, you can probably have the other, as well. 53% of the SLS AMG’s weight is over the rear wheels. That sounds mid-engined like, very MP4-12Cesque for this front-engined Benz. 571 horsepower is slightly less than what’s on offer from McLaren, but this now-famous 6.3L V8 from AMG is a wondrous engine.
And then there’s those doors. Like the 300SL of 1954, this Benz’s doors open towards the sky above the cockpit. More awe-inspiring and eye-catching than a Lamborghini Murcielago’s scissor doors or the Aston Martin DB9’s swan-like open/closing method, this car’s most talked about feature won’t be 479 lb-ft of torque but the emotion-stirring gullwing appendages.
€177,310, the Mercedes-Benz SLS AMG price, converts directly to about $258,000 USD. Don’t expect that to be the MSRP of the AMG Gullwing when it heads across the pond next year; but it could be close. The SLS AMG’s blunt nose and similarities to the SLR McLaren in its side vents and its bog-standard Benz-like interior won’t deter buyers. This is the kind of Mercedes that’ll incite envy of Ferrari or Lambo proportions. A McLaren MP4-12C/Mercedes-Benz SLS AMG Gullwing comparison will be on the newstands near you before long. For now, check out all 90 pictures of the new SLS AMG below and the McLaren’s 26 images here.