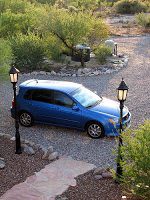 Daily routines of freelance auto writers differ from other professions, that’s true. But the day-in-day-out pattern isn’t full of test drives in the newest and greatest cars. I drive the cars of the people. Over the last week, from July 1st to July 7th, I drove an odd mix of automobile. There’ll be a more thorough write-up of one of the cars soon, but for now, listen to the mix.

When the local Kia dealership started to push inexpensive new cars into my hometown, the word inexpensive did not come readily to mind. Cheap. Few cars undergo a transition as

positive and noteworthy as the Kia Spectra, however. From the Spectra/Sephia of the late 90’s and into the 00’s to the Spectra you see on dealer forecourts now – there was a mighty big change. Changes, really. Cheap is no longer an applicable terminology. (Inexpensive still works.) Performance is a little more sprightly. The overall appearance of the Spectra could be characterized as handsome, rather than antiquated. I drove a new Kia Spectra 902 kilometres on a wedding trip to Prince Edward Island and back. The trip ended on the morning of the 3rd.

As with the Nissan Versa from the weekend before, I was pleasantly surprised, this time more so. The Spectra is a better car than the Versa, but it also costs more. In the eyes of most consumers, the Spectra must compete with the Honda Civic and Mazda3, under whose light the Spectra shines less brightly. Unlike the Civic, the Spectra comes in hatchback and sedan body configurations.

Transportation was also provided by a Pontiac Grand Am, the Grand Am that was succeeded by the Pontiac G6. The Grand Am was a longtime member of the Pontiac showroom, but by the end of its run wa

s not able to compete in the size and price class in which it found its home. The final generation was somehow stuck between Corolla/Civic/Focus and the Camry/Accord/Taurus. The situation was similar to the Ford Contour, the Contour being a decent car that just didn’t fit into Ford’s lineup.

Going back to the late 90’s and seeing that 175 thrashing horsepower was meant to compete doesn’t surprise me. It was a different era. Things that surprise me include the huge steering wheel and a stereo volume knob that may or may not obey your commands. Turn to the right, volume goes down. Turn to the right, volume rises. Hmm? It’s an old car, you say. Sure, but you know GM didn’t care about things like the volume knob in 1999. Consumers do. General Motors is learning.

Even though I believe that a proper Subaru Legacy wagon (as tested here) is one of the best all-around cars on the road, people continue to purchase Subaru Outbacks. As you wish. The previous iteration of the Outback is still a very common sight on roads ’round here. With acres of cargo space to enjoy all year round and an all-wheel drive system which aids in awful winter conditions, the Subaru is a perfect everyman vehicle. Outbacks are a nice used purchase as well. Terrific reliability and interiors that stand up to a beating. There were no hi-po turbocharged Outbacks back in the early part of this millennium, and there’s nothing too flashy about the car on the inside or out. It’s just a plain good car. That’s what this site is all about. 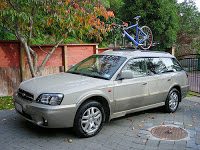 Ford has been making the Ranger, without significant changes, for what seems like a lifetime. My lifetime. Altered and adjusted. Bobbled and bolted on. Differentiated, but not distinguished. Changed, but not significantly. I drove a newer Ranger with a 5-speed manual. I was with a friend who was borrowing the Ranger from the man who would become his father-in-law in 24 hours. The friend had driven the Ranger before and found the clutch and shifter ‘not suited to his style’, shall we say. This is the style of one who drives a 1992 VW Passat with a manual. That car requires good clutching style. To gain ownership and possession of a new mattress and boxspring, the friend required the Ranger. But the friend didn’t want to drive the Ranger, so The Good Car Guy was given the keys and told to write a favourable review.

The Ranger was fun. In a 1989-dirt-road-bumps-and-yumps kind of way. Except we were on smooth city streets. It was fun to work that odd clutch and absolutely imprecise shifter. In a dump-truck-on-the-oil-sands kind of way. The truck did its job, however, and did it perfectly. There’s torque up down in there somewhere, I reckon. It held the bed, and visibility was only slightly restricted. The Ranger would be a great city truck if its ride were to be improved. This is no Toyota Tacoma, not even a Dodge Dakota. Small, unrefined, and haggard even when new. People keep buying Rangers, though. Lots of them. The market for small trucks could grow disproportionately if gas prices continue to rise. Rangers are an easy and cheap way into a truck. It’ll do the job. 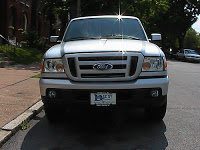