During a four-day trip to Michigan, a Kuwaiti delegation experienced the performance of the Dodge Charger at a ride-and-drive at Chrysler’s proving grounds in Chelsea. Apparently, the experience was a good one. Kuwait will be ordering 150 Chargers to be upfitted as police vehicles and delivered before the end of 2008.

Chrysler, Dodge, and Jeep aren’t the biggest players in the Middle East automotive market, but the Charger is already Chrysler LLC’s best-seller in the region. The Deputy Minister of the Interior, Musaed S. Al-Guwainem, believes the Charger portrays “an image of strength and power”. He ain’t lying. The Charger has a brutally aggressive front end.
For more on police vehicles, check out The Good Car Guy’s Top 5 Vehicles The Police Should Be Driving and make sure you also check out the recent Dodge Charger Driven post. 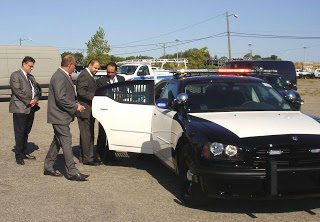