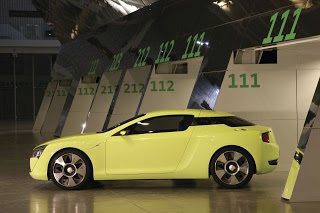 THE KEE BY KIA

There’ve been rumours, and then innuendo, and then verifiable rumours. Kia would debut a coupe concept at Frankfurt with the purpose to evolve, expand, and further Kia’s brand image by way of strong styling. The Kee certainly not going to further the brand by way of powertrain since Kia chose to drop a low-powered 2.7L V6 (197bhp?) in the engine bay.

But this is the new corporate look for Kia. Do recall Subaru’s new aviation look which lasted all of…. several months before the Legacy rejected it forever, the Impreza facelift was simply a runout model, and the Tribeca appeared with a new face. These grandiose announcements and debuts don’t always dig as far into the future as we are made to believe, but expect Kia to at least grow more bold. The Kee is just the start.