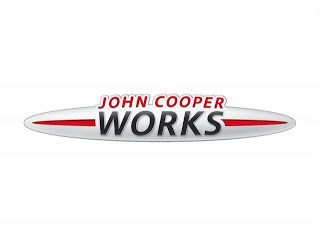 Mike Cooper’s pa tuned his first Mini in 1961.  John Cooper is an iconic name in Formula 1 design, and his impressive touch and know-how had a positive, lasting, and serious impact on the similarly iconic British small car.

Now Mike, CEO of John Cooper Garages, has a strong affiliation with BMW, owner of the Mini brand. Along with the run-out edition of the previous-gen Mini – the outrageous GP – Mike Cooper and BMW have also teamed up to offer upgrades on the run-of-the-mill Mini’s and the supercharged S.
BMW has realized the strength of branding…. duh, and decided to push the John Cooper Works idea a little farther.  The new logo that you see will hopefully become a strong enough performance connection that JCW will be to Mini what M is to the parent brand.  BMW’s M3 and M5 have taken what was a cult following and made it into the major factory performance group in all of autodom, perhaps with Mercedes AMG a close second.
The newest JCW package on the Cooper S provides an extra 20bhp.  An aero pack, sports suspension, upgraded brakes, and cosmetic differentiation are all there for the taking, too.