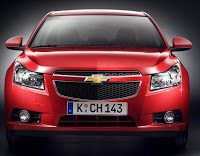 IS THE CRUZE THE NEXT GREAT CHEVROLET?

Skeptics rejoice: Chevrolet has supplied material. Before we deal with that, the news today revolves around the fact that the already hyped-up Chevrolet Cruze, a car intended to be sold around the world, is available to be seen. Yes, that’s right, these aren’t renderings but the real deal pictures from General Motors.

Now, back to the joyful skeptics. Pay attention to the press release, and you’ll see Chevrolet calling the Cruze a four-door coupe. Other automakers using this phrase include Mercedes-Benz with the CLS (quite nicely, thanks) and Volkswagen with the Passat CC. The Cruze’s “arching roof-line, extending from the steeply raked windshield to its sloping rear pillars and short rear deck, brings coupe-like proportions to a compact sedan,” says Chevy. Ah, that’s cute.

More to the point, the release states that Chevrolet, with sales up 23% through July of this year, is GM Europe’s fastest growing mainstream brand. Do you know what means? Sales are up 23%…. and that’s good. GM Europe doesn’t sell Buick, Pontiac, or Saturn. Cadillac and Hummer wouldn’t be considered mainstream. That leaves established European brands like Opel, Vauxhall, and Saab to compete with a new interloper. Who flippin’ cares?
Back to the real point: is this the next great Chevrolet? While we don’t want to lavish praiseworthy terms like ‘great’ upon the Malibu, the midsize Chevy is a very nice car and the Cruze picks up on some of its finer points. Bolder and more modern design will be paired on the inside with a higher quality interior. Under the hood expect decently peppy engines with improved efficiency. That sounds like the Malibu’s modus operandi.
Hopefully pictures don’t tell the whole story. The most unfortunate part of the design sits in the wheelwells. Though the wheels look fine and are probably sized alright, they look small enough to fit on an early 90s Cavalier. As a whole, the Cruze is inoffensive but worthy of some positive attention. Styling is a factor in this sector (Civic, Corolla, Focus) but not the highest priority in most buyer’s minds. Europeans can expect to see the Cruze on the road early next year. North Americans will have to wait quite a while longer.