Issue after Everest-related issue arises in Jon Krakauer’s book, Into Thin Air. Whether it be a brief history of Sherpas, a play-by-play of every village passed by on the trek to Base Camp, or a look at the long overdue rise of environmentalism at the foot of the world’s tallest mountain, Krakauer engages the reader with the sort of anticipation one would expect from a man who viewed all this in the context of a soon-coming climb up Mount Everest. Yet one matter which winds a path through many pages of Into Thin Air is that of the qualifications, experience, health, and even morality of the hundreds of mountaineers (or supposed mountaineers) who were attempting to reach the summit of Everest in the spring of 1996.

It is Krakauer who points out amidst an attempt to resolve such a controversy that, “The question of who belongs on Everest and who doesn’t is more complicated than it might first appear.” Krakauer indicates a number of factors which, by themselves, should not (and could not) shun a climber from the mountain: wealth, expedition affiliation, age, and previous altitude acclimatization. At the same time, Into Thin Air‘s wildly accomplished author suggests a lack of experience and a willful disregard for safety are reasons to avoid guiding a hopeful climber up the harrowing, intimidating peak. And at no point does Krakauer ever suggest he has all the answers to issues so complicated that regulations have gone unregulated for decades and self-policing expeditions have gone un-policed.

True, the Subaru Outback is not a climber attempting to reach the summit of an iconic mountain. You’ve got a point there. But stick with me after the jump and you’ll understand the parallels. 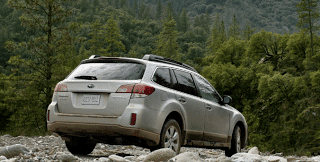 For a good portion of its lifespan, certainly in its initial two generations, the Subaru Outback was simply considered a slightly taller Legacy wagon with some SUVesque lower body cladding. Many other automakers hopped on the bandwagon, most notably Audi’s A6 Allroad (still available elsewhere) and Volvo’s much-loved XC70 Cross Country. Europeans have been offered some less attractive propositions including the Volkswagen CrossGolf and Skoda Octavia Scout. Generally speaking, these up-armoured vehicles are simply wagons or hatchbacks with extra ground clearance and consequently greater height as well as bodywork which would supposedly protect bumpers from challenging elements on an off-road course. Indeed, many of the donor vehicles are excellent in their own right but in “SUV” form lose much of their appeal once on-road dynamics are taken into account.

The 2011 Subaru Outback, however, is doing anything but losing its appeal. Credited with paving the way for Subaru to become a mainstream automaker in North America, the first Outbacks can’t be credited with doing a whole lot more than a garden-variety Legacy wagon could. Both featured all-wheel drive, the same engines, and the same interiors. One could crawl a slightly higher curb. Consumers didn’t care – they wanted the Outback, so much so that the most recently-introduced Outback up and committed flagrant fratricide. The Subaru Legacy wagon is not a member of Subaru’s Canadian or American lineups.

Still, it seems as though the question is being avoided. Is The Subaru Outback An SUV? Well, what is an SUV?

Sport-utility vehicle is, to be frank, a term which means absolutely nothing. “Sport”…. like, er, basketball? Auto racing? Nah, people don’t race Chevrolet Tahoes. And they only play sports in cars on Top Gear. Utility? One hopes for some form of extra practicality in sport-utes, but often, the case could be made that Grandpa’s Country Squire was more utilitarian. Vehicle? Uh, yeah: they’re all vehicles.

The term, therefore, clarifies nothing. Cultural definitions only go so far. The Good Car Sister, in place of SUV, prefers jeep, small j. Don’t ask how she’s managed to stick with such ridiculousness when such a knowledgeable brother exists. Crossover or CUV, as in crossover utility vehicle, have moved in as noms du jour for vehicles as unique as Acura’s ZDX and the Chevrolet Traverse. Crossing over, like Shania Twain playing on pop radio stations in 2002, is a strange way of defining a specific format of vehicles which are basically tall hatchbacks with all-wheel drive. Nevertheless, no matter the coinage, we aren’t making any progress in determining how the Subaru Outback’s qualifications align with the stars. Let’s look at the vehicle itself.

Motor Trend awarded the 2010 Subaru Outback its coveted SUV Of The Year title. Although the decision sound strange at first, Motor Trend didn’t shy away from the obvious argument, that the Outback wasn’t an SUV. The Outback had greater ground clearance than the Jeep Grand Cherokee; it’s just six inches shy of being six-feet tall; three unique all-wheel drive variations are available; towing capacity is 3000 pounds. Plus, when perching one wheel on a rock in icy blue with grey cladding, the Outback looks like an SUV.

But c’mon, the Outback is just a jacked up Legacy wagon – which still exists, remember – and the Legacy wagon is, you may remember, a wagon version of the Subaru Legacy, a car. C-A-R. Two degrees of separation does not an SUV make…. or does it? Countless SUVs or crossovers or CUVs available today use platforms or architecture or core elements provided by cars. Was there something so tough about the Chevrolet Equinox that you thought it was, ahem, a genuine Jeep Wrangler rival? Did you plan on taking your new Honda CR-V on the Rubicon Trail? What about your rich cousin’s BMW X5 and its snobbish BMW-only sport-activity vehicle designation. You’re wanting to drive down PEI’s red dirt roads in that?

Why don’t we just rephrase the title of this article? See, Subaru’s U.S. website thinks the Outback is not an SUV. Subaru reserves the SUV heading for Tribecas and Foresters. Moreover, Subaru has been calling the Outback something else since it was first introduced back in 1996.

Granted, for anyone who’s seen an AMC Eagle, there’s falsehood in Subaru’s labelling of the Outback as the “World’s First Sport Utility Wagon.” However, Subaru is allowed to showcase the ® symbol when using the aforementioned five word set. American Motors didn’t put up much of a fight.

Thus, as you would have already guessed from GoodCarBadCar.net’s constant inclusion of the Outback in midsize car sales charts, the Outback isn’t believed to be an SUV, not around these parts. Subaru was quite accurate in its initial designation, so let’s stick with it.

Jon Krakauer’s Into Thin Air introduction begins like this:
In March 1996, Outside magazine sent me to Nepal to participate in, and write about, a guided ascent of Mount Everest. I went as one of eight clients of an expedition led by a well-known guide from New Zealand named Rob Hall. On May 10 I arrived on top of the mountain, but the summit came at a terrible cost. Among my five teammates who reached the top, four, including Hall, perished in a rogue storm that blew in without warning while we were still high on the peak. By the time I’d descended to Base Camp nine climbers from four expeditions were dead, and three more lives would be lost before the month was out.