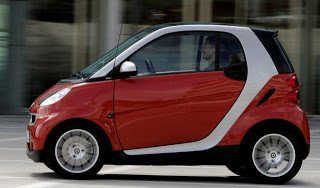 Perhaps the timing is ripening for a GCBC Lowdown on the smart fortwo. Perhaps this post would be aptly named a rundown – a simple mathematical view of the new smart fortwo. Canada sees a somewhat different fortwo than that which is available to the Americans.

Canada fills their Mercedes-Benz designed smart fortwo’s with diesel; Americans use gasoline. Canada will be seeing the second generation of smart’s, and so will the USA. But this is the first smart to clear American customs.

Canadian smart buyers see an entry price $3,400 higher and $4,660 higher on passion cabriolets. Horsepower numbers are significantly different. There’s one major reason for the disparity. The core design of the Canadian smart enables it to run on diesel and is also 0.2L smaller than the gas-powered three-cylinder in the American-market smart fortwo. Although power and torque are up in the new 800cc turbodiesel engine, the gas engine is still 26 horses stronger.

Fuel efficiency, however, is the smart’s calling card. Maneuverability and safety may be major selling points, but a potential 71mpg (3.3L/100km) in the smart fortwo cdi is… just … plain… incredible. smart USA believes their fortwo will average 40mpg under “normal driving conditions and current standards”. The previous, less-efficient diesel smart fortwo produced Canadian government ratings that equated to 51 US mpg in the city. Even considering that smaller differential in the fuel mileage of the two cars, the diesel smart travels an extra 87 miles (139km) on each tank.

d buy himself another gallon of fuel with the savings, and that gallon would make up 40 of the 70 mpg advantage the diesel smart normally holds. (In my neck of the woods diesel/gas are equivalently priced.)

An American smart fortwo wouldn’t even drink a whole tank of fuel if you drive from Detroit to Indianapolis. Had you been driving the diesel smart, you would have continued through Indy and all the way to Nashville, at which point you’re likely able to roll into a Shell station with a whiff of fumes remaining.

More smart fortwo math? You can cram an extra 60 litres of junk in the back of a smart fortwo that you wouldn’t have found space for in the first fortwo. It’s 12 total cubic feet is equal to that of a Honda Civic sedan.