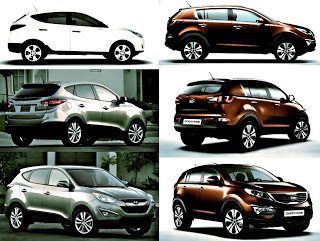 The Good Car Guy has been paying a lot of attention to small SUVs (or whatever you call them) over the last 24 hours. First, there was the look at sales of cute-utes in the United States last month. Then came a look at the USD and CAD base prices of every soft-roader known to man. Today, a look at new pictures of the 2011 Kia Sportage…. arranged in revealing light.

Perched next to the Kia Sportage in the image below is its brother from another mother, the Hyundai Tucson. Sharing plenty of their underthings is one thing, but these two do not go out on the town dressed alike. Kia uses slightly harder lines for the Sportage while Hyundai rounded out the Tucson, making it appear lower where the Sportage seems more butch.

Although these vehicles share architecture, their respective marketing strategies will be drastically different. The Hyundai Tucson is already available priced just $1,000 beneath the Kia Sportage’s big brother, the Sorento. It’s improbable that Kia would so closely align the 2011 Sportage with the larger, more thoroughly fitted Kia Sorento – even if the two combine forces to battle America’s best-selling SUV, the more expensive Honda CR-V.
Regardless, this post is about image. On the right, you see the Kia Sportage. On the left, Hyundai presents the Tucson. Angle for angle, Kia’s got it nailed. Seen together, the Hyundai may come across as slightly upscale but doesn’t seem as cohesive.