68,000 – vehicles Honda expects to sell in India during this fiscal year which ends next month

90,000 – vehicles Honda expects to sell in India next year
160,000 – vehicles Honda expects to sell in India in 2010
1,100,000 – approximate total number of vehicles sold in India last year
405,000,000 – money, in USD, poured into Honda’s Greater Noida plant in India since 1997
28 – race victories taken by Honda in the Indy Racing League from 2003-2005 before Honda became the sole engine supplier
166,608 – total number of miles driven by IRL drivers – with Honda engines of course – in 2007
1 – total number of in-race engine failures during those 166,608 miles
65 – race victories taken by Honda in CART, another major open-wheel; Formula style series in America, during Honda’s nine seasons of competition in that series
1 – IRL/Champ Car series created by this past week’s merger of the two competing open-wheel series’ in America
2,000,000 – vehicles built at Honda’s Swindon, England plant during its 16 year lifespan as of last week when a silver CR-V rolled off the line 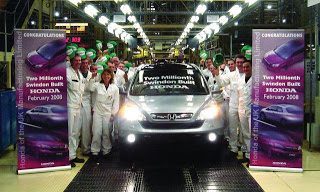 25 – growth, measured in percent, of production volume at the Swindon plant over the last eighteen months
80,000,000 – added investment, in pounds sterling, that Honda will put into the Swindon plant
0 – total wins expected in the Formula 1 season by Honda’s own technical director – the very-famous former Ferrari tech director – Ross Brawn, who said, “Today we don’t have a car to win, we will see what happens during the year, but in 2009 and 2010 we can be more optimistic.”