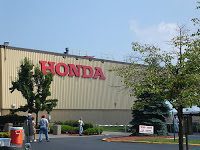 To what extent? Honda has reached all-time production levels in North America which were unanticipated when Honda first began manufacturing cars on this continent in the early 80s. For a full rundown of all of Honda’s North American Numbers, keep reading.
—–
34,000 – total Honda employees in Canada, the U.S.A., and Mexico
77 – percentage of Honda vehicles sold in North America in 2008 which were built here, too