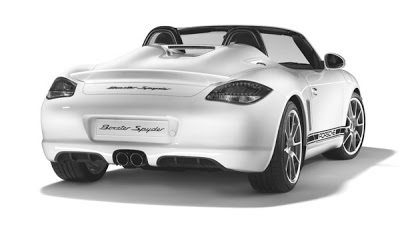 We’re nearing the end of the line for the current, second-generation Boxster. The Spyder, therefore, is not long for this world. A person who regularly adopts glass-half-empty characteristics would have to acknowledge that there is nothing wrong with this car. In the common parlance of positive people, that means it’s perfect.

The Porsche Boxster Spyder is perfect.

True, the Kia Rio costs less. The Nissan Juke consumes less fuel. The Chevrolet Suburban carries more people. The Jeep Wrangler comes with both a soft top and a hard top. The Volkswagen GTI offers German performance for less. But it’s the fact that those other cars do other things well that so aptly highlights the Boxster Spyder’s perfection. This car almost looks silly doing anything but driving.

Don’t get groceries in a Boxster Spyder, because people will see it sitting in a supermarket parking lot. Don’t let your new Boxster Spyder be seen anywhere within ten miles of home – we’ll all know you didn’t drive far enough. If you have a car like this, one that begs to be driven, one that asks for nothing else and provides little else, please just drive it. Fast and far.

It’s Not Actually Perfect: The Boxster is sparsely equipped by intention. There are certain options you may require, of course, but others you may not: the dreadful $3140 cream white paint comes to mind. Should automatic climate control cost $1760 in a car that costs $61,800? Should heated seats be a $525 option when, in Canada, they’re standard in a $15,595 Kia Rio?

Sales Stats: Porsche says low inventory has hurt Boxster sales of late. Though the range has the lowest base price of any Porsche, the Boxster doesn’t have the mass market appeal of a retractable hardtop nor the benefit of rear seats. Therefore, the Porsche is routinely out-sold by the Audi TT, BMW Z4, and Mercedes-Benz SLK. Monthly and yearly sales figures for the Porsche Boxster range can be viewed here.