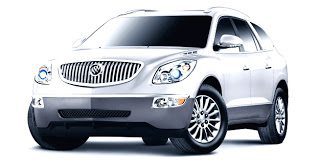 Repeating for a third consecutive installment, the 2011 Buick Enclave is a resounding success for one of the fastest growing automotive brands in North America. It doesn’t hurt that the Enclave is supremely quiet, eminently comfortable, and capacious enough to hold you and seven others.

What really gets Enclave fans going about the big brute of a Buick is the exterior design. The fenders bulge gracefully, not ostentatiously. The shadows created near the bottom of the doors mask the height of what is, in truth, a gigantic vehicle. Lights, both at the front and rear, are shaped alluringly but not to the extent that they’ll be unfashionable by 2013. Though Grey Green Metallic and Red Jewel Tintcoat aren’t the best shades for the Enclave, this Buick never looks out of place or out of touch.

For a site that has a whole lot to say about representing a new generation of first-time car buyers, the Buick Enclave’s inclusion here seems misfiled. Stare at it long enough; drive it far enough, and you’ll be hard-pressed to come up with a roomier, more luxurious, more beautiful, more effective family driving tool for the price. Don’t judge a book by its cover; don’t judge a Buick by its badge. Based on merit, the Enclave is the best premium/mainstream utility vehicle that’s ever been available.