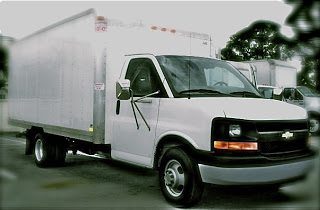 Wondering where The Good Car Guy disappeared to? Posts have been few and far between the last few days, for which GoodCarBadCar formally apologizes. However, when a new dwelling is calling; even the important GCBC Nation is placed on the back burner.

In all honesty, two vehicles were used in the producing of this move. You can learn more about the excursions of The Good Car Guy and the Ford Excursion up in here, but yesterday’s unique drive was spent in a Chevrolet Express Cube Van.
Yep, that’s right – GoodCarBadCar isn’t just about Corvettes and Imprezas, Enclaves and Tahoe Hybrids. Unable to hire movers, we contacted friends (who contacted friends) and our move was completed in a matter of a few short hours. Thanks to The Good Car Mom who supplied the grub, all seven movers were energized.
16-ft cube vans with 6.0L gasoline-fed V8s haul. It was a long time ago that The Good Car Dad taught me to adore dual-rear wheels, though that may’ve had more to do with F-350’s towing 32-ft RVs. Anyway, our stuff fit easily with room to spare, while the V10 Excursion handled the loose ends admirably. Better yet, we haven’t found a broken plate; bowl; or picture frame. Unless, that is, I’ve spoken to soon. Unpacking is ongoing.

Surprisingly, the accuracy and directness of the Chevy’s steering put the (admittedly older) Excursion to shame. Floatiness is an unbecoming but necessary part of large haulers; and on that count, the Excursion displays a stick-to-the-road fortitude that the Express can’t dream of possessing. Do remember, this is all relative. Comparisons to an FX35 or even the previously linked-to Tahoe Hybrid would be sickening. Disturbing. Revolutionary… but useless.
Having participated in the piloting of an older Ford cube many years ago (alone, within 24 hours of receiving my license. Yikes!), this was still the first time I’d driven a vehicle with a reverse beep. Highly disconcerting on the narrow downtown HFX streets at the culmination of our move, that is. Just what am I driving here? If it’s large enough to mandate a reverse beep, I doubt my qualifications.
Ah, but then I recalled the teaching I received at the hands of an ex-cop at General Motors’ Milford Proving Grounds. Apart from high-speed maneuvers and skid control lessons, we also learned reversing techniques to simplify the process of backing up in large automobiles. Put. Into. Practice.
Result. Back of the net. Nothing but net.
In other words, nothing was bumped. No bumpers were harmed. Pedestrians remained as safe as they were before The Good Car Guy hit the roads in a cube van. That’s not saying much in this neck of the woods, but it says something.
Visibility is the greatest issue facing any newbie cube van driver. Side mirrors are all y’ave got, son. Make do. Previous experience taught me to maintain awareness as to the width of the cube behind me, since the cockpit is substantially narrower.
It is understood that the Chevrolet wouldn’t have suffered any acceleration deficiencies until the organ, washer, and couch became members of our household, and thus; factors in this move. Nonetheless, the difference from empty to full wasn’t felt in terms of forward motion but in turning. It’s not as though the Express would have rolled, but the weight being thrust onto the front wheels around medium-speed sweepers requiring adjustment.
At 7:45 last evening, adjustment had taken place. A couple dozen kilometres and almost an hour’s driving under my belt, and one final parking spot in which to place the Chevrolet before the keys went in the drop box. From the Excursion,The Good Car Girl directed me to a wide open pull-through in the middle of Budget’s parking lot.
With a contemplative glance…. a wave of the finger…. a check of my mirrors, I threw the gear lever into reverse.
Beep. Beep. Beep.
Curb.
Doh.
My trajectory was terrific, but for the first time, 16-ft of Chevrolet Express had me fooled. The 4-speed automatic was again shifted into drive and a move forward of four inches finished it off. My most recent cube van experience will be remembered for one thing, mainly: not only did the stuff fit in the truck; it also fit in our new smaller home.