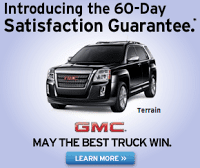 The ad you see embedded as an image in the right side of this post came to my attention earlier today. To be honest, at the time I noticed the GMC Terrain ad it was beneath this morning’s post on the Honda CR-V. Of course, I didn’t click it (that would be illegal, or at least immoral, by Google’s standards) but I grabbed a screenshot and headed over to GM.ca.

There are two reasons I find this kind of advertising to be perfect to be perfect for the “new” General Motors. We’ve all seen the tv commercials with Ed Whitaker talking about great new veehickles and the company’s desire to stand behind their products. And I greatly respect GM’s desire to express confidence by offering customers the option of returning their vehicle inside 60 days. (Am I allowed to do that more than once? Ha!) To my own internal advertising response meter, the brief tagline beneath the ad which appeared on GoodCarBadCar.net and surrounds numerous vehicles @ GM.ca sends an even stronger message.
No, it doesn’t sell the veehickle. But it does make me think, “Hmm, I should go take that veehickle for a drive”. For many of my friends, family members, and acquaintances – and readers – the last decade of GM veehickles haven’t done a decent job of getting them to the dealer, let alone buying the car once there.
General Motors is now saying, “May The Best Car Win”. Well, shouldn’t we at least take them up on the offer of exploring the possibility that their veehickle may be the best. They do, after all, sound as though they’re okay with customers buying a Honda or Toyota if the Honda or Toyota really is the best. GM just doesn’t think you’ll find the Honda or Toyota to be the best. And by expressing such confidence in their veehickles, I become tempted to take their products seriously.
Which is when the 60-day money back guarantee kicks in. “May The Best Truck Win” sells me on the idea. “If it hasn’t won you over, we’ll take it back” sells me on the reality.

Remember, GM isn’t applying this incentive to Hummer (to be sold), Saturn (sold), Saab (sold), or Pontiac (dead and/or dying). Rather obviously, GM doesn’t stand behind those products as firmly. Though not completely suggesting that the new Buick LaCrosse, GMC Terrain/Chevrolet Equinox, Cadillac CTS, or Chevrolet Camaro are “the best cars”, it shouldn’t surprise anyone to learn that GM’s veehickle lineup is a whole lot better than it was just last year. Hyundai didn’t become a huge automaker by backing away from its cars and saying, “They’re cheap”. Hyundai provided gigantic warranty coverage instead. GM won’t sell enough cars if all their commercials ever tell you is “Get this Chevy for a whole lot less money than the foreign jobbie down the street”.
GM has begun to walk the walk. Might as well talk the talk, as well.