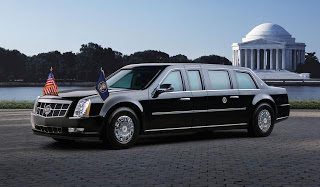 The 1993 Cadillac Fleetwood Brougham Presidential Series was the first presidential limousine to be completely styled, designed, and engineered by General Motors for Secret Service duty. Before Bill Clinton’s Caddy, presidential limos were reworked by outside companies for the government.

This doesn’t change the secrecy surrounding the elements, configuration, and equipment in presidential limos, two of which were provided to George W. Bush in ’01 and ’04. (Two, or could it be twenty?) That last DTS Presidential foreshadowed the styling of the civilian DTS which debuted later.
Rumour has it that President-elect Barack Obama’s Cadillac limousine is no Cadillac at all, unless you count the Escalade. Apparently this stretch limousine that’ll carry Barack and Michelle around on Tuesday is based on the GMT900 platform – that of the Silverado/Tahoe/Suburban/Avalanche/Sierra/Yukon/Yukon XL/Escalade/Escalade EXT variety. The Good Car Guy has done the calculations, and GoodCarBadCar.net is ready to proclaim that the most definining characteristic of the new presidential limousine is….. great weight. Surely this car is heavy. 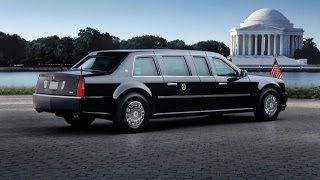