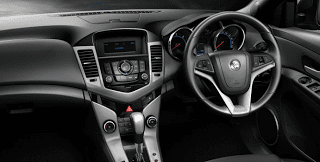 Back in August, The Good Car Guy asked if the Cruze was on track to be the next great Chevrolet? Expressing doubt, the formal opinion of GoodCarBadCar.net has resided somewhere around the point at which the Cruze is clean outside; handsome inside, but not enough of a gamechanger. Hitting the North American market with something that’s class-competitive doesn’t seem good enough with hugely dominant players like the Honda Civic and Toyota Corolla collecting sales anytime something hot and heavy isn’t available.

Some of us wanted the next General Motors small car to shock and awe even if it doesn’t offer the best driving dynamics or highest quality interior. With Cruze-like characteristics, it looks like Chevrolet will need another generation or two to be known as a top small car player. For now, Holden has released images of their rebadged version, to be known as the, ah… Cruze. Again, the exterior is clean but anonymous. Inside, the Cruze approaches greatness on first glance. Read The Good Car Guy’s 2-part review of the Chevrolet Cobalt, the Cruze’s predecessor, here.