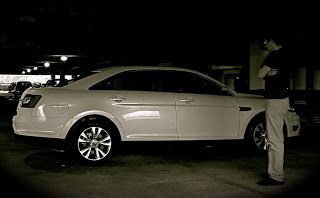 The second half of Tuesday, November 3rd, has been consumed by Ford’s 2010 Taurus SEL, an all-wheel drive 4-door with oodles of space for people and stuff in addition to boatloads of stigma after generations of Tauruses failed to impress. The original Taurus was the basis for the amazing SHO, a car which pleased The Good Car Guy enough to be found in GoodCarBadCar.net’s 100 Favourite Cars list last month.

The Taurus of the mid-90s was a festival of ovals – impressive in a strange way but terribly tiresome over time. That Taurus evolved into a less offensive car at the dawn of the new millennium. Then Ford basically replaced that car with the Five Hundred; which turned back into the Taurus; which evolved into the much more stylish 2010 Taurus that you see here.

Early impressions of the Taurus are mixed, even bittersweet. Possibly a bittersweet symphony, but that won’t be finalized for a few days. Given the overwhelming nature of the positives and the unbecoming aura of the Taurus’s negatives, the pro & con list below is the most efficient way of opening you up to this Ford’s mannerisms.
PROS
Space: it’s everywhere – trunk, back seat, front seat, glove box. Everywhere.
Quiet: typical of many new large cars, the silence is pervasive.
Solidity: that which should be damped is, that which should clock does.
Style: it doesn’t knock you over like the initial Chrysler 300, but it is clean and classy.
CONS
Stature: you don’t get space without it but this car is gigantic, only 4 inches shy of an Expedition.
Ride height: somehow perfect for ingress yet rotten for egress. Plus the Taurus sits a little high out back.
Visibility: the pillars could hold up the Parthenon and the cowl is about level with the Parthenon’s ceiling.
Image: one way or another, I can’t shake the fact that it says Taurus on the back.