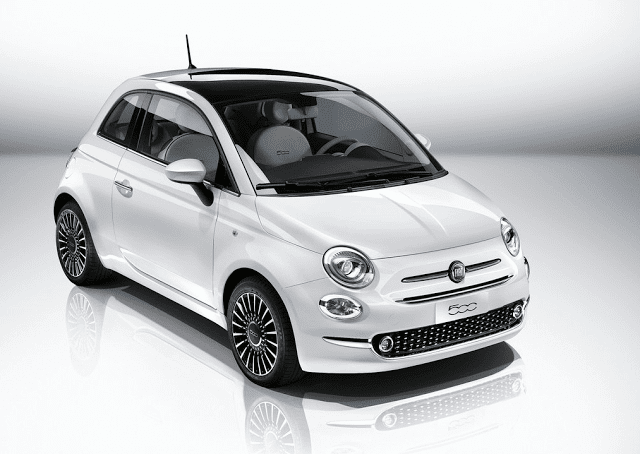 FUTURE
The Fiat 500, not the original but the latest, has been around untouched for too long. So now we have a refreshed, face-lifted Fiat 500 on the way, and no surprises here, it looks very, very much the same on the outside.

INSIDE THE AUTO INDUSTRY
Plucking data from one month alone does skew the U.S. fleet sales picture, but June was noteworthy because Fiat Chrysler Automobiles outsold the Ford Motor Company on the retail side of the industry. But June may have been an anomaly at Ford, and while Automotive News reports that, “Fleet stats cloud sales picture,” that’s nothing new. One might also note that a good fleet sale may well be healthier than a bad fleet sale. And good fleet sales do exist, according to automakers: “They also have been careful to note the distinction between rental business and what they see as “good fleet” sales — notably bulk sales to corporate and government customers.

These customers, automakers say, provide an acceptable profit margin and tend to keep their vehicles in service for two or three years. As a result, they have less of an impact on residual values or retail prices. “

The Ford Motor Company is recalling 182,520 Escapes and Transit Connects (model years 2014 and 2015) because, “the instrument panel cluster be inoperative including a blank multiple functional display (MFD), and non-functional warning chimes, messages and warning lights.”

REVIEW
Car & Driver says that if you want your 2015 Focus ST to feel like a 2014 Ford Focus ST, you’ll need to forego the option of the Pirelli P Zero Nero all-seasons and opt instead for the Goodyear Eagle F1 Asymmetric 2s. They’re the same size, but the latter tires make a huge difference in braking and lateral grip.

WATCH
Across the pond, Kia UK is marketing the new Sorento as an upmarket alternative to the Land Rover Discovery Sport. As such, you’ll find standard power tailgates. Yet oddly – at least to a North American buyer – there are still manual transmissions. See how CarBuyer likes it.