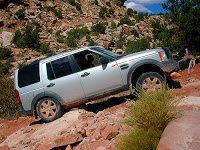 One Ford spokesman has voiced an odd feeling coming out of Ford’s executive compartments. He said that Ford cars available in Europe as diesels aren’t sold here, and the market is too small for them to develop U.S.-only diesels.

Ford, rarely one to spot or start a trend, may be letting this one pass them by. A few thoughts come to mind. For starters, don’t most engines get used across the board of an automaker, or automakers? So the cars you sell in Europe; with diesels of course; aren’t available here. Can you not just take the diesels; just some of them; and fit them to the cars you have here? And didn’t CEO Mullally recently mention that some of those Euro-only Fords would be great on the continent anyway? The big luxury guns from Europe are a’preparin and a’executin their diesel plans. Even Honda and Hyundai are getting ready. Ford might want to keep the beat…..

Speaking of Hyundai, there is a great contrast between their Santa Fe/Land Rover commercial and Volkswagen’s Passat/5-series commercial. We had possession of a Santa

Fe for quite some time and enjoyed it thoroughly, and the brief time I had with an LR3/Discovery was a pleasure as well. I have no bias.

These vehicles aren’t competitors. Even so, Hyundai has a mocking ad comparing the Santa Fe and LR3, with the Santa Fe being a quicker accelerator, quicker around the slalom cones, and $22,000 CDN cheaper. No joke.

I think it’s interesting. It does a good job of pointing out that high-value vehicles can offer performance equivalent to or better than the high-end stuff. But if this is th

e new kind of ad we’ll be forced to see, I feel that I must protest. Compare a car-based soft-roader that squeezes in 7 seats with a very spacious heavy-duty go-anywhere off/on roader? Nonsense.

Ford Mustang GT’s are faster around a track than Bentley Conti GTs, but nobody is suggesting that as a justifiable reason to buy a Mustang instead of a Bentley. Therein lies the problem with the Hyundai ad: they really expect me to take it seriously. The VW ad has two guys in a car, the Passat driver comforting the BMW driver for being able to ‘take him’ on the highway. It’s comical; fun. It humours me, rather than causing feelings of annoyance……

The Kuwaiti section of the Aston Martin ownership group has already received offers for its stake. Along with Prodrive’s David Richards, somebody’s rich uncle in Texas, Kuwait’s Investment Dar bought Aston Martin from Ford – which still holds $77 million worth – just two months ago. Two months in and opportunity to make a 50% profit must sound nice, especially when the offers roll in “every day”, like they do for Investment Dar, says executive VP Amr Abou El Seoud….

Roger Penske’s United Auto Group revealed on Wednesday the 9th that 12,600 are quite eager to get their hands on a smart fortwo in the USA. UAG offered first dibs to people who put down $99 deposits. The money was refund

able, but it puts you at the top of the waiting list and makes you a smart ‘insider’. Only 50-60 dealers will sell the smarts, even with UAG’s massive network of mostly-import dealerships. smarts will likely have a base MSRP under $12,000 in the States. The smart is oh-so-small is rated highly in crash tests.

Combine rising fuel prices with something unusual like the smart, and you may have a winner. UAG thinks they may sell out the first year’s allotment before they even have vehicles on their lots, even if not all deposit-holders go through with the sale.