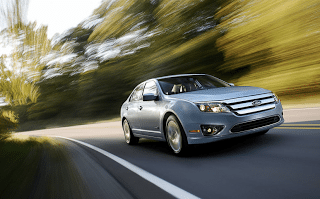 Specifying one specific Fusion model when the whole range of Ford’s mid-size sedan has been improved may seem surprising at first glance. Consider the Fusion Hybrid’s conventional way of going about its business, however, in addition to its jaw-dropping fuel efficiency, and surprise becomes clarity.

As opposed to the numerous gas-electric hybrid drivetrains which paved the way, the Ford Fusion Hybrid powers up hills; steers into a parking spot; and handles a twisty road like a normal car. No, it’s not the sportiest version of the Fusion, nor is it the fastest mid-size sedan available in North America or even the best-handling. What the Fusion Hybrid does offer is actual value. This car is priced like a regular top-line Fusion. You don’t have to pay thousands more and wonder how you’ll ever earn back the initial outlay. There’s been the odd hybrid that could say the same thing, but it wouldn’t drive like the Fusion. Equipped as nicely as the 4-cylinder Fusion SEL, the Fusion Hybrid actually generates more power under the hood. Yes, you pay more but yes, you’ll get more.
Begin contemplating the Ford Fusion Hybrid’s ability to travel nearly twice as far on a gallon of gasoline when driving in the city, and the rest of the Fusion range seems nearly forgettable.
—–
Engines: 156 horsepower; 136 lb-ft from a 2.5L inline-four plus 106 horsepower; 166 lb-ft of torque from synchronous electric motor equals 191 net horsepower
Base USD Price: $27,625
City Mileage: 41 mpg
Range: With a tank capable of holding 17.5 gallons of gasoline, the Fusion Hybrid could potentially travel 717.5 miles in the city without stopping for gas. On the highway, the Fusion Hybrid would be limited to 630 miles. Car & Driver saw 34 mpg in the real world, meaning the Fusion Hybrid’s range would still be an amazing 595 miles (957.6 kilometres).
CLICK HERE FOR THE GOOD 12 v3.0 PART II
CLICK HERE FOR THE GOOD 12 v3.0 PART IV