Any excursion in an Excursion is an excursion indeed. Small e, big E, small e. Ford’s Excursion has been ‘replaced’ by the Expedition EL, never having made it onto the Sierra Group’s list of top 10 must have items.

You will find that most any passenger vehicle with a V10 engine will make people stare. Audi S6 is handsome enough to induce locked gazes. Dodge Vipers have always produced goggly-eyes wonderers. Likewise the Ford Excursion, for a couple of reasons.

Reason #1: It’s big. 18 feet long, way over 6 feet wide and similarly tall, with over 8 inches of ground clearance and a 26.5 ft turning radius. Meet an Excursion in the Costco parking lot? Just back up – get outta da’way.

Reason #2: It has just one person aboard. At least this morning there was just one human on board a green V10 Excursion heading to Lunenburg, Nova Scotia. One utterly massive machine with one typically sized human in a space that can hold about 100 cubic feet of cargo. People look… and look again. They think I am an insult to humanity as my vehicle guzzles about a gallon every time I drive a mile. I had no choice.

At 8am I began my drive of the 8-passenger Excursion to Lunenburg, home of the famous Bluenose. Fishermen would be waiting for their land-based transportation. Thirty-six hours at sea and the entry port is a 100km drive from the last port of call. They want their truck and they want it now. Aye aye, Cap’n. Righty-o, boatswain. Roger, seaman.

Excursions are built to tow, and indeed it towed just this morning. 11,000 lbs is the max trailer weight, and today’s trailer likely doubled the overall length of the com

bo. No trouble maneuvering through the company owned gates with a tandem like that, although the fish buyers and their 18-wheelers rubbed the nearby buildings a touch. Having such a capacity to tow makes for a brittle ride, even with the lengthy wheelbase and a weight of such magnitude. Power and torque is great, but a vehicle needs to be built to tow in the places you can’t see. Take a body-on-frame heavy duty truck, make it into an SUV that can tow 11,000 lbs and add four-wheel drive…. expect to be jiggled about.

Passing power was discovered to be more than adequate. Torque is a lovely thing – especially when there’s 425 lb ft of it at just 3250 rpm. Visibility is far worse than what you’d wish for though, and even a simple lane merging can be a trial in heavy highway traffic. Narrow two lanes in around Blockhouse and Mahone Bay are not suited to the Excursion. I noticed that the smaller vehicles coming towards me on narrow roads were far more likely to steer closer to the shoulder. Thanks, and uh… sorry.

Steering response and feedback is un and none. Unresponsive that is, and completely lacking in feeding back any telltale signs of what the front wheels were doing. Steering 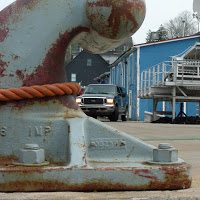 inputs are just suggestions, I found. “Please Mr. Excursion, turn a bit to the right; no, a little more please. Oh, can’t do it today? OK we’ll try again later. Sorry for asking.”

The dead spot on center that you sometimes hear about in large trucks with large tires is really quite a misleading statement. Dead spot on center? OK, sort of. But really it would be more appropriate to say, “She’s gone a little lifeless around the straight ahead, as well as to the right and left and any degree of direction in between.”

The brakes were actually confidence inspiring. That may be because when the brakes fail, you’ll never take the brunt of the impact. Brilliant.

Interestingly, that guesstimate of of 10mpg really is altered when you view such figures in terms of pmpg. People miles per gallon. Take you, yourself, and a smart fortwo dieseland drive back to the capital from Lunenburg and we may get the same pmpg. There’ll be eight people on board the Excursion on that drive, thereby causing the bulking machine to fulfill its true role while multiplying its 10 mpg rating by 8. Sounds great. 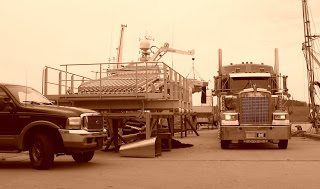