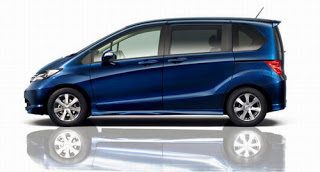 Eight seat transportation in North America typically comes standard with a large V6 (minivan or large crossover) or a gigantic V8; as in Chevrolet Suburban or Ford Expedition. Imagine those eight seats squished into a vehicle that’s not nearly as long but rather upright and suitably wide. Imagine again – an eight seat vehicle with a Honda badge (not a Pilot) that’s powered by a small four-cylinder. Just 1.5litres of four-cylinder, freed to transport you, your offspring, and their friends.

It’s unusual to suggest that an automatic transmission or CVT; paired with an engine pumping out little more than 100 horsepower, is freed to do anything. Not surprisingly, Freed is used in connection with a Japanese-market vehicle, a place where the Mysterious Utility and the Bravo Exceed for outdo Freed for dorkiness.

The Freed will be a very inexpensive family vehicle. Honda figures that 40% of its parts were already produced for the Fit, a version of which is a member of GoodCarBadCar.net’s Good 12. Honda sales have jumped over 7% this year in a country that’s facing a dramatic decline in overall sales. The hope is to push 4,000 Freeds per month in their home nation.
Doubtful though it may be that the Freed competes on space terms with a good ol’ Texas Suburban, Honda knows good and well that Tokyo roads are suitable only for vehicles of small stature. At the same time, Japan’s government and many businesses are pushing families to reproduce at a higher rate. Replacing the Mobilio with a front or all-wheel drive, somewhat fun-to-drive, very economic solution should hit at the core of what 4,000 buyers need.
Could the Freed compliment the Odyssey in the North American Honda lineup? Don’t count out the possibility, as Honda is open to exporting the Freed. Gas prices would have to continue to rise, and even with that, a Civic-sized engine would perhaps be mandatory for power-hungry midwesterners.