You can read more about New York auto show debuts in today’s previous posts here and here, but some Numbers have surfaced post-intro at the show.  Here’s to keeping up to speed….

—–
5 – gears available in the manual transmission of the 2009 Dodge Challenger R/T, one less than the manual transmission of the Challenger SRT8
2009 – year in which the Nissan Cube will be imported to the USA (and Canada, we can assume)
375 – horsepower generated by the V8 of manual-transmission Challenger R/Ts, five more than the automatic-equipped R/T
24 – expected highway mpg delivered by the 245-bhp-V6/auto combo in the base Dodge Challenger SE
2 – extra pound-feet of torque available in the automatic-equipped Pontiac G8 GXP over and above the 400 lb-ft in the manual G8 GXP
30 – percentage increase in fuel economy of the future Ford Transit Connect taxi (many of which will be seen in NYC) over the current Ford Crown Victoria
75 – cubic feet of cargo capacity (referred to by Ford as space for 75 cubic feet of “parcels”) along with the three passengers
2003 – the year the Transit Connect was voted “van of the year”, six years prior to its official American on-sale date 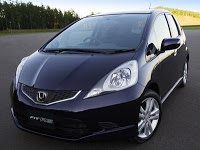 290 – horsepower produced by the 3.5L V6 in the upcoming Nissan Maxima, 35 more than the ‘old’ Maxima
2,000,000 – total global sales of the first generation Honda Fit, a Good 12 winner
1.5 – engine capacity of the ’09 Honda Fit’s four-cylinder, identical to the previous Fit, although Honda says the next Fit’s powerplant is a new design