Two vehicles not seen on course at my recent trip to General Motors’ Milford Proving Grounds were upcoming Chevrolet vehicles. You’ll see the next-gen Malibu before long in your neighbour’s driveway (or perhaps your own), the Volt is still a long way off. We can only hope that it’ll retain bold styling and become a production reality while GM/Chevrolet is still riding a Volt-size wave of hype.

Whether or not Chevrolet’s Malibu is a roaring sales success; we can’t know for sure. He

re’s The Good Car guy’s expert analysis: Chevrolet will sell plenty of Malibu’s in the next year or two, but unless people feel as though the Malibu is a worthy alternative to Accord & Camry, its sales success will be tempered by high incentives and low resale values. If the Malibu is perceived as an even better vehicle than the Accord and Camry, not only will it sell, but it’ll sell at its MSRP. Apart from that, year’s two or three thru the end of its life cycle will see a good effort put to waste, aided only by the high-value quotient it will provide.

The Volt is a plug-in hybrid. GM would prefer you to title it more accurately, and so we should, as an electric car with a range extender. That extender is an internal combustion engine which can power-up the battery pack when needed. The Volt may be well be future of automotive technology. The Volt and Malibu are both pictured here inside our lunch room. Odd though the Volt may be, it can’t be powered by chicken caesar salad, though the photo may indicate that to be the case. 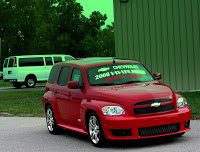 Chevrolet’s HHR (designed by PT Cruiser stylist Bryan Nesbitt) was shown alongside the proving ground’s ‘Black Lake’ in SS form. Should be a pretty quick people-mover. And, another vehicle we weren’t asked to drive is the Chevrolet Express you see in the background. Such disappointment. We were, however, driven in Express/Savana’s extensively, to and from the Inn at St. John’s as well as at MPG. Pick-up was provided at the airport in a Chevrolet Tahoe (plastered in E85 Ethanol decals) and I was delivered back to the airport Wednesday morning in a similarly liveried Avalanche.