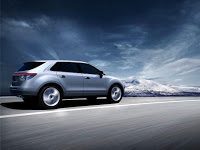 Saab builds a competitive vehicle? We won’t know until the 9-4X is produced and production examples are driven, but on modernity; appearance; and appeal, the 9-4X BioPower stacks up well. Especially when contrasted with its Bad 8-deserving brother, the 9-5.

The 2.0L turbocharged four-cylinder loses 55 horsepower when fueled with gasoline (instead of E85 ethanol), but the lower figure of 245 ain’t shabby either.