Sales figures for entry-luxury cars in Canada end up about an eighth or a tenth the total of America’s Sales Stats for the same cars. Compare the Graph you see below with the identical Graph utilized for U.S. purposes to study the figures in-depth. BMW is just as dominant here in Canada as it is in America…. and the rest of the world. The Mercedes-Benz C-Class has ridden the coattails of its good looks to very decent Numbers in Canada. And its very clear that, were it not for the Infiniti G37, German dominance would be ultra-visible given the Audi A4’s totals, too.

Cars not included in this group which could easily be added include Acura’s TL and EL, the BMW 1-Series, Mercedes-Benz B-Class, Audi A3, Volvo S60, Lexus ES and HS, as well as the Hyundai Genesis. For one reason or another, these ten were selected. 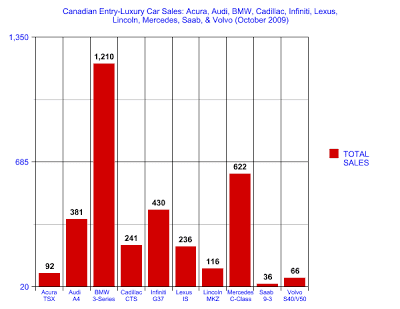