With an almost innumerable variety of configurations, the BMW 3-Series has become a gigantic success for the Munich-based purveyor of luxury automobiles. No direct competitor comes close to attaining Sales Stats like that of the 3-Series in the United States. Graphs like the one below have been available on GoodCarBadCar.net since August, inclusive of September; October; November; and December. In September, the Mercedes-Benz C-Class almost came within 1,500 units of the BMW. That’s as close as anybody’s gotten since the end of the summer.
BMW isn’t riding a magic carpet. The 3-Series sells like hotcakes because it is a hotcake. Thankfully, the Marketplace is full of other hotcakes, too. The Good Car Guy heartily recommends the Infiniti G37. The aforementioned C-Class is a handsome alternative. Audi’s A4, especially in Avant format, is beguiling. The Cadillac CTS offers bucketloads of fun and can be had in wagon form now. The Good Car Guy has even enjoyed the wonders of Volvo’s little S40, in both 2.4 and T5 spec. Don’t let the popularity of the 3-Series deter you from the BMW itself… or any of its rivals.
Do impress your friends by educating yourself with facts and figures from the 2009 Year End Graph below. 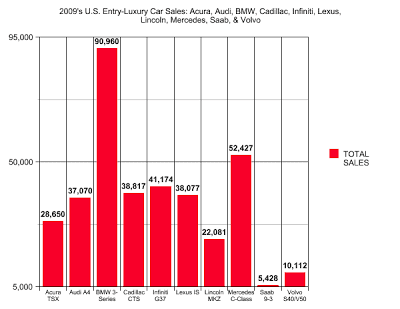