In her 50th career IndyCar race, Danica Patrick claimed a victory. That makes her the first woman to win in a major closed course racing series. Danica has taken heat in the last couple years for being the Anna Kournikova of racing – pretty enough to be a star; not quite good enough to be a winner.

Claims like that can be put to rest. (Some forget Kournikova’s two grand-slam doubles championships, too.) Yesterday, or was it today?, in Japan, Danica Patrick flew by Helio Castroneves with two laps to go and never looked back. Castroneves finished over 5 seconds back.
As the mainstream news media catches on to this story, expect the Champ Car/IndyCar merger to gain attention as well. Danica’s win is important for women, but also important for the type of racing she competes in. 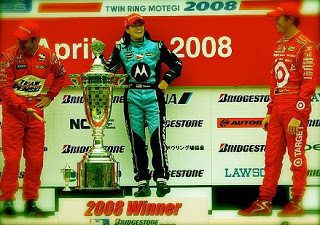