Turning your garden variety sedan into a two-door coupe isn’t a simple chop job. Automakers rightly assume that the coupe buyer needs to see more than just missing doors to assume the coupe version is a good version. Therefore, the manufacturer decides to differentiate the two-door in other ways – sometimes succeeding; sometimes not.

Coupes come and go like rising tides. Not only does the generic coupe sector sell with force and disappear again into the abyss, but specific models run through a cycle of faltering and ascending time and time again. Do you know of many small cars with the image once held (and still held) by the Acura Integra? Or its successor, the Acura RSX? Or its teammate, the Honda Prelude? They’ve all disappeared. Poof.
Coupe sellers persist, however. Many believe that the struggling U.S. economy will severely curtail sales of sporting cars, in the same way that convertibles are suffering now. Even so, Cadillac debuted a high-priced, high-class CTS coupe in Detroit and has every intention of seeing it through to production. Of course we all want it – it’s spectacular – but will we buy it? Hmm.
BMW rides the wave of coupe success with the 3-series. Somehow, regardless of prevailing market conditions, the 3-series two-door squeezes past the “to axe” list.
This leads me to the more specific topic on my mind. The latest Honda Accord coupe is surprisingly stunning. Walk down Rodeo Drive or Main Street, it at least makes you turn for a second look. Honda didn’t take the proverbial design hand book and throw it out the proverbial window, but, the typically staid company decided to give the Accord coupe added jazz compared with the sedan. Result.
Toyota’s Camry isn’t perceived as a sportatious vehicle and likely won’t be anytime soon. The harder Toyota pushes the hybrid sedan, the less the Camry Solara makes sense to me. Its design elements would work well on an expensive yacht; but not a car. Interestingly, in the USofA, the car is entitled the Camry Solara on Toyota.com. Toyota.ca sticks simply to Solara. One way or another, Toyota did a good job of making the coupe appear truly different from the sedan. Different isn’t always desirable.
Then there’s the Nissan Altima coupe. The Good Car Guy attacked it before for appearing awkward and bloated. That was before the car was seen live and in action.
Who’d have thunk it possible that the Altima coupe could be worse than awkward and bloated? Nothing exposes a vehicle’s awkwardness and bloatedness quite so much as a grocery store parking lot and a cell phone camera, so here it is. 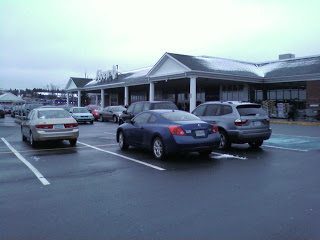