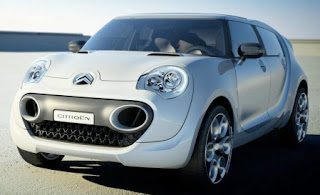 Could the C-Cactus be a future Citroen product? Well, probably not for us North Americans, considering Citroen’s absence from our marketplace. But even if the C-Cactus concept doesn’t appear as a production vehicle in Europe and the rest of the planet, much of its design and ideology will.

The C-Cactus shares with its namesake a “reputation for low consumption.” Ha. Good stuff. It’s four-cylinder diesel-hybrid would likely achieve 69mpg in the real world. Interesting elements abound on this funky machine. The headlamps and taillamps are held in the exact same mouldings, and in fact, the front and rear fascias are interchangeable. Sounds gimmicky? Not really. It’s one way of building cheap. The dashboard has gone AWOL; the steering wheel hub holds the info which would have been displayed elsewhere. Gimmick? No, just building cheaply. That stuff’ll save you money too, mind. This Cactus would cost you only as much as a basic Citroen C4.