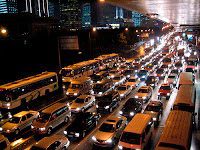 Shanghai Auto continues its dominance in the Chinese marketplace – with the help of two massive outsiders. Shanghai GM (“importers” must participate in joint ventures to gain permission to sell and build in China) tops the list of China’s top ten with sales of 500,000 automobiles.

The story of General Motors claim to the number one spot in China is undercut by news of two Volkswagen joint ventures nailing the podium as well. In fact, Shanghai Auto and VW team up for third place, 34,000 units behind Shanghai GM and just 8,000 units behind FAW Volkswagen.

Chery wass China’s most successful auto exporter in 2007. They sent 120,000 vehicles out of China

and sold 381,000 inside the Great Wall, as well. Total Chinese production reached half the volume of Built-in-the-USA product during the twelve months of 2007.

Read the original mention of China sales on GoodCarBadCar

Honda, Toyota, Nissan, Hyundai, and Ford were also involved in joint ventures with sales in the top ten. BMW sales topped 51,000. Honda sold 30.6% more vehicles than they did in 2006.

8,790,000 new motor vehicles were sold in 2007, twice as many as China saw leave showrooms in 2003. Vehicle ownership per 1,000 people is still about two-thirds less in China than in the rest of the world. For per capita ownership to reach that of the USA, the figure would have to rise 17x’s. There are still approximately 956 million people in China without a vehicle. (Feel free to check my math.)