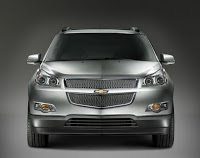 CHEVROLET HAS HIGH EXPECTATIONS FOR THE TRAVERSE

Badge engineering, the forming of multiple automobiles from the same foundation while adjusting the fascias and switching the logo, is alive and well. Ford Escape, Mazda Tribute, Mercury Mariner? How ’bout the Chevrolet Cobalt and Pontiac G5?

Not surprisingly, the most prominent badges often steal the sales. General Motors’ impressive Lambda platform has played host to a trio of successful crossover utes. At the high end, Buick’s Enclave is a seller; plus it has earned favour right here at GoodCarBadCar. The Saturn Outlook is the garden-variety Lambda from the brand that promises something different. At present, General Motors’ trucking badge, GMC, sits on the front of the Acadia, a vehicle that GoodCarBadCar named one of the Top 5 Cars the Police Should Be Driving.
The trio of Lambda CUVs will soon become a quartet. Typically, adding members to your band is a surefire bet for increasing tension and messing with the harmonies. Imagine what happens when the fourth and latest member is intended to be the lead singer and main spokesperson. Chevrolet wants its Traverse to eventually sell 150,000 units per year. That’s about what the Enclave, Outlook, and Acadia sell. Combined.
Is the Traverse able to attract the attention and hype to overwhelm its brethren in sales? More than likely, the Traverse will drive down the road with exactly the same mannerisms as the former trio. Features and content won’t measure up to the Enclave, nor will the exterior appearance. However, the Chevrolet Traverse will be the most affordable CUV from the Lambda platform. Cheap is good.