THE POWER OF CHEVROLET: MAY SALES STATS IN AMERICA SHOW CHEVY DOUBLING REST OF GM COMBINED

Unfortunately for General Motors last month, not only did Toyota topple Chevrolet for the U.S. sales crown; Ford did too. In fact, Ford Motor Company’s Ford brand, which you may have heard of, sold more cars and trucks than any other automaker; Toyota included.

But I digress.
The power of the bow-tie badge is still scarcely believable. Add up May’s sales of every other General Motors brand and Chevrolet nearly doubled that total. Hummer, Saturn, Saab, Buick, Pontiac, GMC, and Cadillac combined for about half as many sales last month in the USA as completed by Chevrolet. While the argument against killing Pontiac and the case against Buick or GMC has validity in some far-flung corner of some human brains, the greater un-asked question is this: Is New GM about four core brands or Chevrolet+3? Like a sports coupe that was never built to carry passengers in the rear seat but can technically do so, New GM looks heavy on the Chevy and weak on the other links. 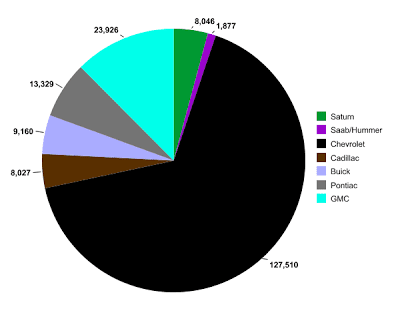 Take a look at the pie chart above to see GM’s current Chevrolet emphasis. Is GM’s Chevy reliance such a bad thing? No, not really, I suppose. But if New GM is going to be anything but Chevrolet, Buick better start selling cars here as well as in China, Cadillac better do better than selling at half the rate of BMW; Lexus; and Mercedes, and GMC’s got to take some of Chevy’s truck burden.