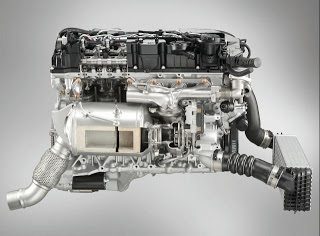 Carbon Motors has placed an order for 240,000 diesel engines. These diesels will sit under the hood of the E7 police vehicle when it begins production in Connersville, Indiana. Reaction to Carbon’s choice of a diesel powerplant must be seen in the light of other patrol car engines.
Over the course of the last few months, General Motors announced it will be returning to the police fleet vehicle market with the Holden-derived Chevrolet Caprice Police Patrol Vehicle. Not terribly unlike the Pontiac G8 North Americans were briefly offered, the Caprice PPV will be available with the increasingly common 3.6L GM V6 and the downright ubiquitous small-block V8, here in 6.0L form.
Find More Police Car Info From GoodCarBadCar.net
Over in Dearborn, the replacement for the Crown Victoria Police Interceptor has been revealed as the Ford Taurus Police Interceptor, potentially to be followed up by a Ford Flex Interceptor or even as a police version of the next Ford Explorer. In the Taurus, Ford’s bog-standard 3.5L V6 seems to be the probablebase engine for the FTPI; a twin-turbocharged 3.5L EcoBoost V6 from the Taurus SHO, Ford Flex, Lincoln MKS, and Lincoln MKT slots in to form a true cruiser.

Finally, Dodge has been outfitting the Charger Police Vehicle with the common man’s 3.5L V6 and the well-known 5.7L Hemi V8.
How will those responsible for police vehicle procurement feel about the news that Carbon Motors will be equipping the Carbon E7 with a twin-turbocharged 3.0L inline-six diesel from BMW?
Concerns about the Carbon E7 revolve around the whole project, not just the underhood motivation. Carbon Motors says their vehicle will be built to last 250,000 miles, nearly twice as long as most police vehicles. They’re basing this estimate on manufacturing techniques, material usage, and general engineering excellence. But the advantages of the Carbon E7’s “purpose-built” stature also brings about disadvantages: neither the company nor car have any reputation for reliability and durability in the past, not in the consumer Marketplace or in fleet vehicle manufacturing. Adding a high-tech BMW diesel to the mix excites the enthusiast – and should please future drivers of the Carbon E7 – but throws up caution flags in the offices of police commissioners when they realize most of their technicians were accustomed to working on a simple 4.6L 2-valve SOHC V8 from Ford.
Reasons still abound for adopting the Carbon E7… with its BMW six-cylinder. In the BMW X5 xDrive35d, the 3.0L diesel six is rated at 19 miles per gallon in the city and 26 on the highway for a combined figure of 22mpg. So says the EPA. This in a vehicle weighing 5,225 pounds; a vehicle capable of 0-60mph in under 7 seconds thanks to 265 horsepower and 425 lb-ft of torque.
Except Carbon Motors doesn’t think the E7 will weigh 5,225 pounds. In fact, the company thinks their police vehicle will be closer to 4,000 pounds. Fuel economy, therefore, could be more in line with that of the BMW 335d, a car which weighs in at 3,825 pounds, is capable of 0-60mph in 6 seconds, and is rated by the EPA as a 27mpg vehicle. 23 miles per gallon in the city and 36 miles per gallon on the highway for the 3,825-pound BMW could translate to 21 or 22 city mpg for the Carbon E7 and 34 or 35 highway mpg…. if the Carbon E7 actually weighs 4,000 pounds.
Compared with the 17/25 mpg rating for the Ford Taurus SHO, 16/25 mpg rating for the Dodge Charger R/T, or the 15/24 mpg rating for the (semi-applicable) Pontiac G8 GT, the Carbon E7’s fuel economy alone could be enough to tempt police forces away from traditional choices.
Besides, Carbon Motors makes a good point in regards to “purpose-built” military aircraft. You don’t see camouflaged Cessna Citation CJ3s landing on the USS George Washington. No, Lockheed Martin designs a purpose-built F22 Raptor for United States Air Force. Same goes for tanks (not Chevrolet Suburban-based) and submarines (not reconfigured Baja 35 Outlaws).
Perhaps it’s time police forces began to think the same way.
Related From GoodCarBadCar.net
Ford Taurus Police Interceptor Introduced
The Future Of Police Cars In Pictures
Chevrolet Caprice Police Patrol Vehicle Gallery
Carbon Motors Releases Data On Its Police Car
Lamborghini Gallardo LP560-4 Polizia